This was a complete meal as I included peas in the bottom.

half a small sweet potato and the same amount of ordinary potato, peeled and cut into cubes
seasonings
bit of grated Not-Parmesan (Supermarket hard Italian cheese - cheaper and vegetarian friendly)

Method
I softened the vegetables in spray oil plus a splash of water. 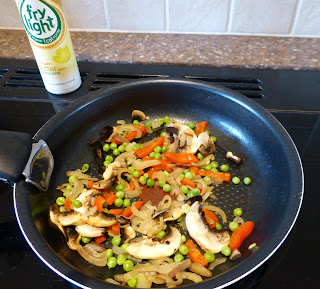 Then I added the fish, cubed, and the prawns and then the quark with some milk.  As it heated it threatened to split so I hurriedly added some thickening granules which stopped it.  I think it was lack of fat that caused the 'damage'. 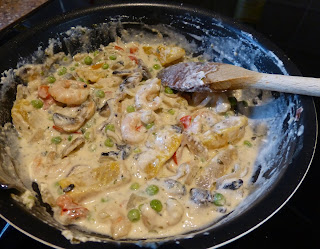 I added some seasoning (not much salt because of the fish) and some dried parsley.

I steam cooked the two potatoes together and then mashed them up with salt, pepper, and a bit of grated Not-Parmesan.

I put the fish mix in the ovenproof dish, spooned the topping over and spread it out 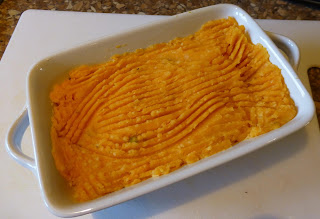 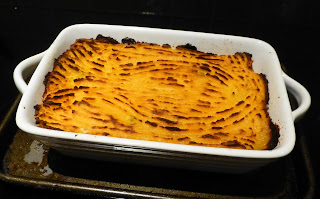 It was jolly tasty but . . .
. . . apart from the splitting problems, the bottom and the topping sort of amalgamated as they cooked so there wasn't really a clear division or sauce, it was more like a large fish cake.  I suspect that was the quark too and in future I will use lower fat soft cheese instead as I usually do, or just make a sauce with milk and thickening granules.
But now I know I can use that quark in fishcakes and probably in veggie burgers, etc, too.  I don't find it particularly nice 'raw', so to speak.

The potato and sweet potato topping was delicious.