There's nothing new about this one.  I had planned in three tiny apples - the kind you get in 'savers' bags dead cheap or advertised as 'children's sized' and priced shockingly high!  They needed using up, you see, so one for breakfast, one for lunch and one for dinner (with other stuff).
However, the thing about doing a challenge like this is that you get used to smaller helpings so I didn't want the breakfast or lunch apples, even though they are so wee.
Someone on 'Pound a Day' (the Facebook page) said I could treat myself to a crumble, so I did!

I peeled and cored the minute apples (and ate the peelings because they were nice) and then simmered them with a little water, a little sugar, a little cinnamon and a little garam masala (which is surprisingly nice in sweet things).  The apple mixture cost a little less than 20p

I rubbed the butter into the flour and then mixed in the oats and sugar.

The apple went into two little pots and the crumble topping went on top and yes, there was enough to make two.
So each little apple crumble cost me under 12p and the one I have just finished was simply scrumptious.  I'm so glad I have another one for another day! 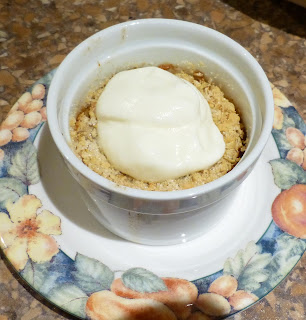