This was posted in 'Slimming on a Shoestring', a companion group to 'Pound a Day' which inspired this blog in the first place.  It's not an original idea; I think I have mentioned it before, but it is truly delicious and so easy.  Myt thanks to the original poster for reminding me - if you read this blog, you know who you are. 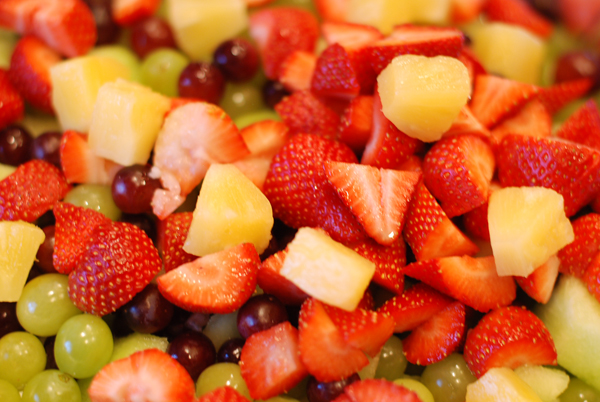 What you need.
Some frozen fruit - what you fancy but one MUST be banana.  I used cherries, plums, strawberries, mango and banana, all of which I have in bags in the freezer.  The banana was some manky YS ones that I peeled, sliced and immediately froze.
Something to sweeten - I used a tiny amount of stevia but it was hardly needed really.  You could use sugar, honey, maple syrup - anything like that.

Put the frozen fruit in the blender and zizz until it goes 'creamy' (that's the banana working).  It takes longer than you expect but you can see when it gets to that point very easily.  Taste and sweeten if necessary and zizz any sweetener in.

Spoon into a freezer-proof container and freeze.  It sets rock hard so take out about half an hour before you want to scoop!

This worked really well so I made some more with mango, pineapple and banana and scooped it into some ice lolly moulds (with some difficulty because it's still semi-frozen and had to be pushed down) before freezing it.  Lo and behold, healthy, fruit packed ice lollies with no added rubbish!

If you use a value bag of frozen mixed fruit it's more frugal, of course, and I can't pretend the ice lollies are cheaper than the cheap ones you can get, but they're so much better for you.
Also, if you don't have banana, you can use yogurt to 'cream it up'.  Or cream, of course, but that defeats the purpose.  Maybe a good way to use up leftover cream, if there is such a thing.  :-)

(photo coming later if I ever remember!)