Really you can add anything suitable to this but because I used 'breakfast' stuff, that's what I have called it.

The photo is terrible but never mind. 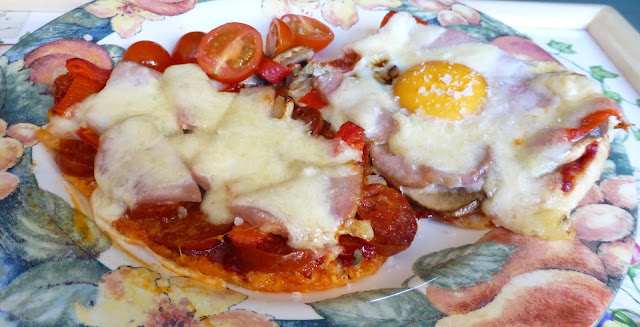 What I used:
one small pitta (which were YS), cut in half 'butterfly' style so that it opens up
ketchup and tomato puree for the sauce
oregano (I used fresh from the garden)
finely sliced onion, softened in a bit of spray oil
sliced pepper (I used a bit of a roasted red pepper from a jar)
one mushroom, sliced
about an inch of a chorizo ring, skin off and sliced into thin pennies
two bacon medallions, any fat cut off, cut into strips
1 egg
some mozzarella 'pulls' (I used a Savers mozzarella and have more than half left for another day - can you freeze mozzarella, I wonder?)
black pepper

Mix the ketchup, tomato puree and oregano together and spread thinly on the cut side of each pitta half.  Go right to the edges.
On one half, put half the softened onion, half the pepper, the chorizo pennies and the slices of bacon, leaving a bit of bacon for the other half.  Then add some shreds of mozzarella.
On the other half, put the rest of the onion and pepper, then place the mushroom slices all round the outside, topped with the rest of the bacon in places, and the mozzarella (to stop the egg white from leaking too much).  In the middle, crack the egg.
Over both, grind some black pepper and finish off with a few sprays of fry light type oil.
Pop in the oven and bake for around 20 mins until the egg is cooked and the cheese has melted.

Sprinkle some sea salt over the egg and serve straight away.

It made loads and I was stuffed afterwards.  Very, very tasty and I shall use the same method to make other pizzas too.  A great way to use up bits and bobs.


Later edit:  I made this again using leftover roast chicken to go with onion, red pepper, mushroom and sun dried tomato with grated cheddar over the top and it was absolutely lovely.