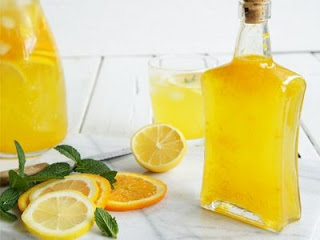 Borrowed from Google.  Mine looks nothing like this because of the sugar I used - see below.

As the name suggests, this is an orange and lemon cordial and it goes back a long way as I used to make it for my two (and me) when they were little.

It makes loads and loads and I had a bit of a mishap as I didn't have enough granulated sugar so  tweaked things a bit.

It is NOT healthy - it is laden with nasty sugar!  However, as a treat or now and again as a refreshing drink or even as a topping for ice cream, it is scrummy.

What I did:
3 oranges and 3 lemons, zest and juice.
900g granulated sugar
900g soft brown sugar
(told you it was high sugar - and the brown sugar is because I ran out of white, a lucky mistake because it has imparted a lovely, slightly toffee-ish flavour to the finished cordial.  It also turns it a sludgy brown, unfortunately!)
27g citric acid (you can get it anywhere that sells wine making stuff - Wilkinson's has it)
12g cream of tartar
1 litre boiling water

Method:
Zest and juice the fruit into a large bowl.
(I cut them in half, place them face down on a plate and microwave them warm - you get loads of juice that way.  However, I am sure I remember when the children were little, I juiced the fruit and then just chopped the rest and threw it all in - it all gets strained out at the end and would be a lot quicker.)
Add the sugar, the citric acid and the boiling water.
Stir well and leave to cool, stirring occasionally.
Leave to steep overnight in the fridge.
Next day, strain out the bits and bottle the cordial in clean, sterilised containers.


Now, I'm not going to get through all of that quickly so I have filled one bottle and the rest has gone into jam jars which I will put in the freezer (no lid until it has frozen).  It may not go solid as it's so high in sugar, but it will be preserved.
It's quite strong.  I would say it dilutes about 1:5

It will be nice as:
a chilled drink with ice and a sprig of mint
with sparkling wine or lemonade (or sparkling water, of course)
with gin or vodka
as the base for a punch
hot as a comfort drink, maybe with aspirin if you're feeling rough
as a syrup over icecream, pancakes, sponge pudding
in yogurt . . .
I'm sure you can think of more.

And, of course, you can reduce the amounts and vary the citrus.  Lime or grapefruit will work.  I'm thinking I might go elderflower picking at the appropriate time and make an lemon and elderflower cordial.  Adding some ginger would also be nice.

And, of course, you can reduce the amounts.  A third of the above would make a more reasonable quantity!