The potato egg cups were delicious yesterday so I have posted about what I did.  Another on the list of Things To Make Again! 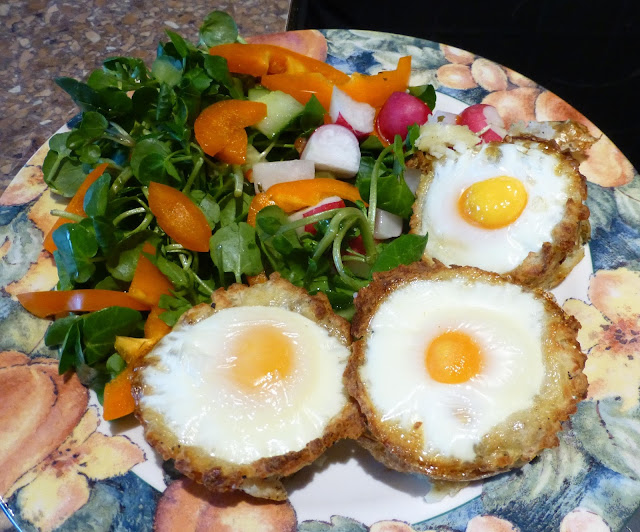 From the freezer:
The salmon and the chicken - better today.

The frugal factor:
er - not.  :-)  But I did have the expensive items in the freezer rather than go out and buy them AND it fits well into the food regime.

I seem to be having a lot of salad right now but salad vegetables are not shockingly expensive and I don't go lavish.  Just a selection of lettuce (little gem or romaine usually), cucumber, radishes, tomatoes sometimes, red or yellow pepper and carrot.  Nice, simple and crunchy.  I treated myself to a bag of watercress too, so that will feature in today's salads as it does tend to go over quite quickly.  I ought to start growing some mustard and cress on the window ledge, like we used to do as children.  That would be nice.  I wonder if I have any packets in the seed tin.

I'm also gearing up to planting some seeds.  Tomatoes, runners, corn, etc.  That means bringing the gopak table in from the shed to put the seed trays/pots on and turning off the radiator in that corner.  It makes the living room a bit untidy but it's worth it.
Posted by Joy at 04:44:00