I thought it might be worth mentioning why I'm not doing weigh ins for a few weeks.
I noticed a behaviour pattern developing, a very common one, I believe, whereby the day of a weigh in it's as if the brakes come off.  It's actually turned into a full on binge a few times, something I haven't really been bothered with for quite a time.  That, in its turn, sets up cravings which make the weekend difficult too.  Not a good pattern.
What they say about unwanted patterns of behaviour is to change the setting, if you can, so that's what I've done - changed the setting.
Yes, I'm monitoring things, but I'm not 'weighing in' formally.  I don't have to as far as SW membership is concerned; one weigh in every eight weeks is required of target members.
It honestly does seem to be helping at the moment which I am very pleased about, and it will be interesting to see what happens when I do a formal weigh in again.
So that's why . . .

What I ate yesterday: 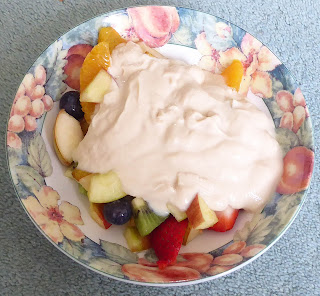 Not a great plating (bowling?) up, but you get the idea.  The yogurt was a toffee Mullerlight for half a syn and the fruit salad was enough to have some for dinner dessert too.  Very nice. 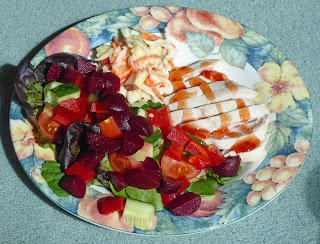 Taken in bright sunlight, sorry.  The chicken drizzled with sweet chilli sauce was tasty and I so love a mixed salad.
I made the coleslaw by shredding some cabbage and some carrot, mixing in three level tbsp lighter than light mayo, some garlic granules and some mustard powder and then chopping and mixing in half an apple, chopped.  It's made enough for three portions so half a syn per portion.
Later on in the afternoon, I had a couple of easy peelers. 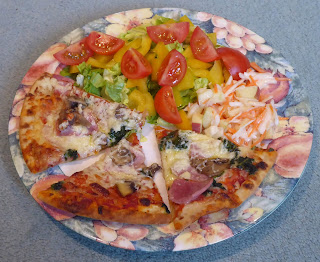 Oh, how I enjoyed the pizza!  It was the nicest of the three of that type* and I added 30g finely grated cheddar.  I had the whole pizza with more salad and coleslaw.
Dessert was layered fruit salad and natural yogurt with vanilla skinny syrup mixed in.  Very satisfying.

Today's meal plans:
B:  a smoothie
I know what SW says about smoothies and, while I appreciate their arguments re fruit juice, I don't regarding pureeing fruit so I don't syn.  My choice, not SW policy.
This is what I will do.
I will weigh out 15g oats and blend them finely.  To them I will add 100g Greek yogurt and some milk, plus a mixture of fruit.  Today I have kiwis to use up plus pear, strawberries and maybe some blueberries, also some skinny syrup of choice.  I will blend the lot together and slacked with enough milk to get the texture/thickness right, bearing in mind that the oats continue to thicken afterwards as they absorb the moisture.  I will leave the lot in the fridge for an hour or so for the oats to thicken and the flavours to develop.
It's so nice made like that.  Filling too, whatever SW might say about blended fruit not having as much of a filling factor!
SW:  up to half a healthy extra A for the milk and three syns for the oats (I'm using my B choice at lunch time)
L:  bacon, sausage and tomato roll with more tomatoes on the side plus the remains of the coleslaw; fruit
I had originally planned this for breakfast until I decided I fancied a smoothie too.
SW:  one healthy extra B for the roll, half a syn for one tbsp bbq sauce and half a syn for the mayo in the coleslaw
D:  slow roasted lamb leg steak, new potatoes, assorted veg; yogurt
Recently I've got used to having a roast dinner once a week but I'm over to Beth's (daughter/support bubble buddy) tomorrow so, as Morrisons had some nice looking lamb leg steaks on the shelf, I'm having one tonight.
I will cut off all the visible fat and slow roast it in a bit of stock and some mint, seeing as my garden mint has started growing again now.  I have just a bit of gravy in the freezer from last Sunday so I will mix that into whatever juices come off the lamb.
I just love slow roasted lamb.
SW:  I am estimating three syns for the gravy - I think it's probably a bit less but just to be on the safe side . . .  I don't think there's enough mint to make mint sauce, not if I use some for the roasting and some to cook the new potatoes in, so half a syn for a level tbsp mint sauce from a jar.  Also half a syn for dessert.
Body Magic:  An online walk and maybe some step
Summary:
half a healthy extra A
one healthy extra B
eight syns
*The pizza was one of the Sainsbury's stonebaked thin and crispy range which are surprisingly low in calories, all under 500 calories, so one can have a whole pizza with a salad and not break the bank.
There are three kinds:  chicken, tomato and ricotta; chargrilled vegetables and olive; and ham, mushroom and garlic spinach.  I think they are all lovely although, like many bought pizzas, they are improved if you add just a bit more cheese!

I will definitely be getting some more next time I'm in Sainsbury's.  Definitely!

Over the past few years I have lost weight following the Slimming World plan and now I am around my target weight, I am working to maintain this by cooking from scratch, being creative with recipes and enjoying what I eat without spending lots of money on expensive ingredients or ready meals.