Good morning!
Straight into how I made the vegetable chips (see lunch photo below).
I started with the broccoli stem, appropriately sliced and use the default air fry setting, 200C, 20 mins.  I checked after ten minutes and it was OK but not done  I gave it another five minutes but by then the slices were overcooked.  Crunchy, yes, but rather charred.  Edible, mind you, I wasn't wasting them.
Then I tried carrot slices at 180.  after ten minutes, it was the same as the broccoli stems.  I gave them a bit longer and they were OK but still a bit overdone.
Last of all, I tried sweet potato, at 150C (lowest it will go on air fry) and after ten minutes they were perfect.
I didn't use any spray oil on this first try.
Next, I will try carrot and broccoli at 150C and see.  After that, it might be worth trying using some spray oil, just to see.   And then there's various seasonings to try too.  Worth a go . . .
Today's meals need to be juggled around because I'm at a meeting at the time when I usually have dinner.  I'll have breakfast as usual, dinner after personal training so mid afternoon and lunch when I get back from the meeting (because it's lighter and it will be closer to bedtime than usual).  Hopefully that will work OK. 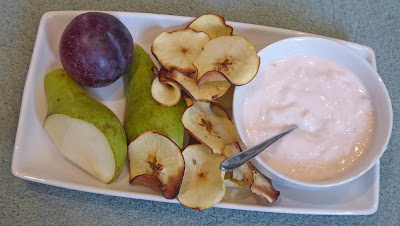 Breakfast - I had a banana earlier, before Groove class and all this afterwards.  I used my slicer gizmo to slice and apple and gave it ten minutes in the Ninja on max crisp.  Bits went crispy and bits went a bit 'leathery (in a nice way) and it had that lovely intense flavour.  I'm sure SW would grumble and say 'tut tut, tweak, syn it' but I don't care.  I will do it again and I might try an apple using the dehydrate function.  That might be really tasty. 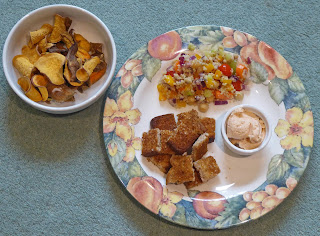 This was so good.  The smoked salmon pate has all gone now, thank goodness (really didn't want to chuck it), as has the couscous.
The vegetable chips are a work in progress really, as described above but I really enjoyed them, especially the sweet potato ones which were the last and best temperature/time I used.
Later on, I had an orange. 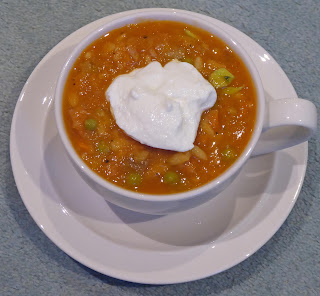 The soup was filling, warming and tasted great.  I decided to have a dollop of 2% Greek yogurt to make it taste a bit more 'creamy' which added half a syn to the day.  Then I had another half bowlful but really didn't want any more after that so there's a bit left for lunch.
A kvarg finished the day off nicely