Good morning to you!
I was sorting out some old Christmas magazines from previous years and just tearing out anything I wanted to keep when I came across an article in BBC Good Food entitled Ten Healthy Habits for Christmas.
I don't necessarily go along with everything it says but there's some good, sound common sense that I think is worth sharing.
I've searched for it online and couldn't find it so I thought I'd share them with you, one at a time.  So here we go . . .
1.  Up your veg
With so many festive dishes often emphasizing carbs and proteins, it's easy to push aside the greens.
Instead, fill your plate with vegetables of your choice to stay properly nourished.
Next one tomorrow.

So, it's the start of my personal Christmas challenge.  I posted the details yesterday so do go back and look, if you didn't see it. 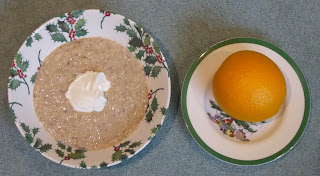 The porridge and orange went down a treat. 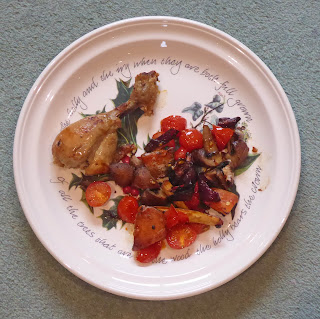 Rather a messy plate but it tasted so good.  Just leftovers from the night before plus tomatoes and mushroom.
Afters was an apple.
Before I went off to my early evening meeting, I opened a small can of tuna, added some mayo (one syn) and that plugged the gap. 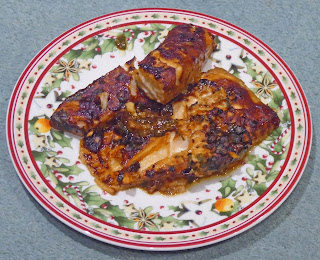 By the time I got in from my meeting, I was cold and tired, it was late, and I couldn't be bothered to do anything other than simply cook the salmon.  It was an enormous portion and very tasty indeed.
Will I buy it again?  No but only because the recipe is dead easy and it will be a lot cheaper home made.
A yogurt finished the day off nicely.

Today's plans:
B:  mince pie baked oats.
The usual baked oats recipe of 40g oats, one egg, most of a Mullerlight or equivalent yogurt and a good pinch baking powder.
Today I am adding some Christmas spice and a tbsp mincemeat for two syns.
SW:  one healthy extra B, two syns for the mincemeat and half a syn for yogurt
L:  cheesy cranberry chicken bake, salad; fruit
It's a bit sort of hunters chicken-y with a Christmas slant but without the bbq vibe and I will use cooked chicken to make it all simpler
SW:  one healthy extra A and I'm not synning the cranberries as they will have been sweetened with Sugarly.
D:  SW chicken tikka lasagne; yogurt
I have no idea, I've never tried it, but everyone says it is really nice so I'll give it a go and we will see.
These things often tend to be low on the old cheese so I might very well add 30g grated cheddar to it.
SW:  half a syn for the yogurt and a healthy extra A
Exercise:  SET (Strike, Energise, Tone) - I'm joining one of Lindsey's ad hoc classes to try it out.
Summary:
two healthy extra As
one healthy extra B
three syns
Posted by Joy at 05:32:00