What is becoming increasingly evident from just three days of calories counting is that, rather than eating too much, I am verging on not eating enough.  Today's was especially telling - 1021 calories (give or take a few strawberries) in a day that included circuit training and a half hour swim.  Not good.  Definitely not enough.
I'll carry on with the planning as I usually do it and checking until Friday, to give it all a fair go, and see what the weigh in says but I think next week I need to take a long hard look at this. 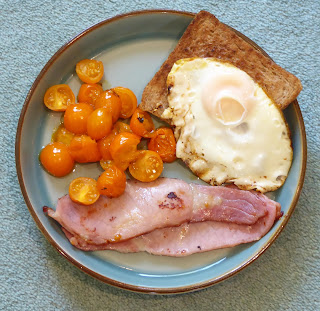 This went down very well after strawberry picking.  There's a bit of fat on the bacon but I cut that off.
I had already had an apple and a couple of plums before I went out picking.
(325 calories) 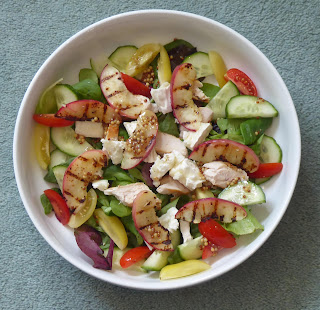 For a concocted salad, this went very well.  In the end I cut the parma ham as it already had chicken and goat's cheese.  Very flavoursome.
I griddled half a nectarine and had the other half with some strawberries for afters.
(481 calories, which includes the whole chicken sizzle, half of which I had for dinner)
Later on, I had an apricot.
(17 calories) 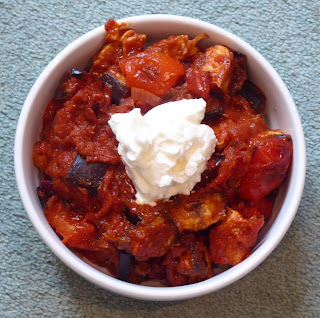 I really wasn't sure what to expect for the aubergine and pepper balti.  The ingredients were so very simple.  However, it was absolutely gorgeous.  I stuck to the recipe although I didn't add any mint (I forgot) and I added some cooked chicken.
Afters was some raspberry kvarg.
And I was stuffed.
(198 calories plus the chicken that was counted with the lunch)
Total calories:  1021.  Hmmm - see above

Today's plans:
B:  cinnamon eggy bread with yogurt and strawberries
I went strawberry picking yesterday so have loads of gorgeousness to eat in the next few days.
SW:  half a healthy extra B for one slice of bread and one and a half syns for 100g 5% yogurt
L:  open cheese toastie, salad; fruit
This is a sort of pizza thing on a slice of bread.  I will spray fry the bread first (stops it going soggy) and pile on some chopped tomatoes, onion, mushroom, pepper, ham and cheese (I think 'pile' is definitely the right word here).
SW:  one healthy extra A, half a B and I think the rest will be protein, free or speed
D:  burger (no bun), chips and salad; yogurt
I'll make the burger with some 12% mince (makes nicer burgers), onion, grated carrot and seasonings and I might add a tbsp of my green tomato chutney (thanks to Sue C for the recipe last year) on the burger and under the cheese.  .
I'll make the yogurt with 0% Greek yogurt, strawberries and skinny syrup.
SW:  two and a half syns for 100g 12% mince (which might be enough for two burgers, we will see), one healthy extra A for cheese and, if I have chutney, one and a half syns
Exercise:  Groove aerobics today.
Summary:
two healthy extra As
one healthy extra B
five and a half syns
From the freezer:
bread
mince
Posted by Joy at 05:09:00