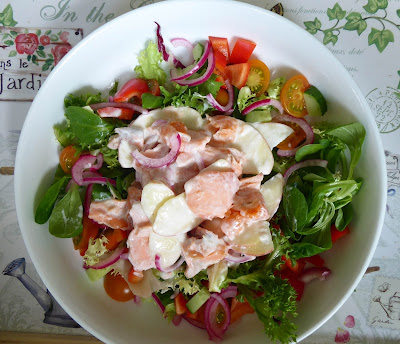 I microwaved a smoked salmon fillet for a few minutes and then flaked it.

I thinly sliced half a red onion and pickled it in white wine vinegar for a couple of hours.

I made a dressing with one tbsp yogurt, one of quark, some lemon juice, half a tsp of creamed horseradish and a bit of salt and pepper.

The base salad was leaves, cucumber, tomato and red pepper.  I mixed the salmon with the drained onion and thinly sliced wedges of a quarter orf an apple, then folded in the dressing and piled it into the leaves, etc.  It was very nice indeed.
And the rest of the apple was dessert!

I didn't take photos of breakfast and dinner as they were pretty ordinary but the fruit with my evening yogurt included three raspberries and seven pink blueberries from the garden and they were lovely and sweet.

Today's plans:
B:  boiled eggs and toasty soldiers!
SW that's my healthy extra B for the wholemeal toast.

L:  fruit, yogurt and a nibble of feta cheese
The usual light weighday lunch
SW:  the cheese will be a healthy extra A

D:  salmon salad, chocolate cake
Easily prepped before hand which should stop be scoffing after weigh-in.  The salmon is the other half of the fillet I had yesterday as they came in twos.  Sometimes Morrisons has smoked salmoin fillets on the fresh fish counter but this week they didn't so I had to get two.  Oh, the hardship!
SW:  two syns for some seafood sauce on the salmon, three syns for some hm salad dressing and one syn for the chocolate cake which I will have with a dollop of yogurt and some berries.

Fingers crossed for this evening.  I won't have lost, not after the weekend at Dad's, but I might not have gained.