Good morning!
Yesterday was a maintain which I'm OK with after last Friday's Chinese takeaway scoff-in.  Holiday week has now started and Back to Basics is the name of the game.
I can do it.

Yesterday's meals
I had intended to have boiled egg and toast but, at the SW meeting, Jen gave me a taster sample of the new Hi Fi bars that are coming out next week (a perk of being on the social team) and, obviously, I had to sample them.
Two is a healthy extra B and I had an apple and an orange to make it a more full breakfast. 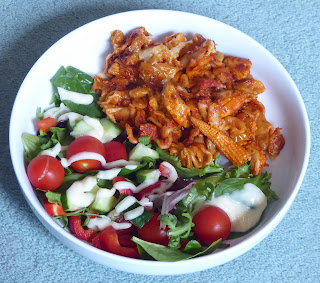 This is the leftover chicken pasta bake with a salad and a drizzle of salad cream.  It was so nice and very filling - no room for afters.
I didn't take my camera with me to the cream tea but the scones were big and I only had room for one scone with some jam and cream (no butter) plus a black coffee.  So that was OK, especially as it was a main meal substitute.  The syns may be shocking but sometimes syns don't tell the whole story and I am sure the calories are fine.

Today's plans
B:  a cooked breakfast
Bacon, egg, fried bread (might make it a bacon and egg sandwich, in fact), mushrooms and tomatoes.
I'll have this as late as possible so that it tides me over until the evening meal as I will be travelling over lunch time.
SW:  one healthy extra B
L:  fresh fruit
. . . if needed - and it probably will be at some point.
SW:  speed and free
D:  steak, cheesy chips and, probably, salad
Because I really, really fancy it!  I might make a mushroom sauce too with some lighter crème fraiche.
SW:  one to two healthy extra As and three syns for two tbsp lighter crème fraiche plus half a syn for yogurt
Exercise: a nice walk along the beach
Summary:
one to two healthy extra As
one healthy extra B
three and a half syns
Posted by Joy at 05:06:00