The penultimate day of my holiday and, while I'm having a great time, it will be nice to get back to my familiar kitchen again.

Yesterday was a bit of a stumble - we all have them now and again, don't we?  Suffice it to say, the anticipation was better than the reality, as almost always happens where food is concerned.  Oh, well, back to what I know I really like! 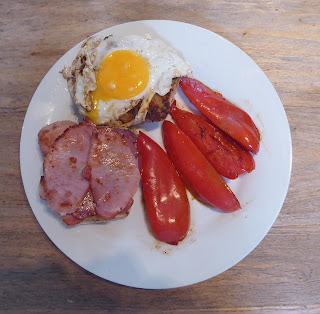 Underneath the bacon and egg is two halves of a roll which I then sandwiched together.  Very nice, it was.
Lunch was at Sutton Hoo and I dithered for a while.  There were some very nice looking salads but we were a bit too early for the soup which turned out to b tomato and red pepper, one of my favourites.  I had a child's cheese sandwich which was a pretty small affair but just right for how hungry I was feeling plus a rather large coffee (the smallest they did though).
We won't swell on dinner.  I will try the jambalaya recipe when I get home at some point.

Today's plans
B:   fruit
I'm really not feeling all that hungry right now so breakfast will be light.
SW:  speed and free (if I have a banana)
L:  tomato, red pepper and ham soup; fruit
I have half a can of chopped tomatoes left so will use this plus other bits to make some soup.
SW:  this should be protein and speed
D:   fish and chips, beer
My holiday treat for my last evening here.  I have no idea of the syns for fish and chips and there is no way I am following the abominable SW advice of taking off the batter and just eating the fish!!  What??????  You may as well just bake a bit of white fish and save the pennies.
It may be naughty but it won't be rubbish naughty - there's a difference!
SW:  the beer is six syns,  No idea of the other!
Exercise:  Loads of sand and pebble walking - which is jolly hard work, I can tell you!
Summary:
unknown today but it's light on healthy extras
Posted by Joy at 07:02:00