Morning, everyone!
SW meeting and weigh in this morning.  It's been a good week, it really has, but you can never tell how the weigh in is going to go, especially when it's hot.
I had a bit of a session in the kitchen yesterday as I had two things I needed to make or start making.
One was a batch of vegetarian sausage rolls, recipe by Delia, that you can easily find if you Google.  Mum had made these ever since Beth  turned vegetarian at the age of around ten/eleven and then I took over.  Anyway, I said I would take some to the afternoon me and the girls (I know it's really 'the girls and I', but the other sounds more matey) are having tomorrow.  I bought the puff pastry (I'm not daft!!), made the filling and ended up with a lovely batch of these vegetarian sausage rolls which have been frozen, uncooked, ready to take out what I need as they can be cooked from frozen.
There was some rolled pastry left over so I cut it into rectangles big enough to top a one person pie, looked up the calories and did the maths and I have five frozen rectangles of puff pastry at eight syns a time to top mince, chicken, etc, if I fancy a bit of a pie vibe!
The other was really just a chicken mixture with chicken, bacon, onion, assorted veg, canned tomatoes, etc.
It made quite a lot of rather delicious sauce so I ladled off two portions of sauce and then two portions of the  mixture, both SW free, and they are now in the freezer too.  The rest will be used tonight.
It wasn't even too hot because the kitchen is on the shady side of the house and I had the extractor fan doing good work. 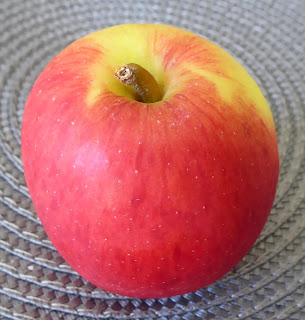 Breakfast
I really wasn't all that hungry so I had an apple and it was lovely! 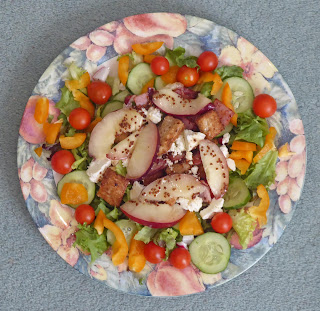 Lunch
However, I had taken the breakfast bread and the bacon out of the freezer so I subbed the bacon for the Parma ham, made croutons with one slice of bread, added the feta and half a sliced nectarine, plus my dressing (one part grain mustard, one part agave nectar/honey/maple syrup, two parts lime juice (from a bottle is fine) ) and lo and behold - feta and bacon salad with nectarine and croutons.
The croutons and the cut up bacon cooked together in the ninja while I was prepping the rest.  Very speedy. and dead easy
So, so delicious.
I had the other half of the nectarine later on.
As for the Parma ham, it did need using up so I added it to what I'm serving up tonight. Dinner
When it came to it, I really didn't want sweet potato fries and just had a nice selection of tomatoes with my chicken.  It was delicious.
The day's eating finished with a yogurt.
It turned out to be quite a busy day and my steps were just over 13,500.  That's good!

Todays meal plans:
B:  yogurt and fruit
. . . because I love it and I have lots of lovely berries to use.
SW:  one and a half syns for 5% Greek yogurt and the berries will all be speed
L:  I'm going to try to get away with just fruit because see below!   :-)
SW:  speed
D:  chicken and bacon pasta bake, salad, garlic bread; lemon and mango meringue roulade
Dave and Anna are round for supper this evening.  The main course is definitely on plan, even the garlic bread, but the dessert definitely isn't.  I fell for it when I was shopping and it is in the freezer, ready to be brought out later.
I'm doing another pasta bake because I love it, it's easy, on plan and there might be leftovers for tomorrow!
SW:  no idea!
E:  a walk
Summary:
not a clue about SW values today but the calories might not be too disastrous as long as I am sensible.
Update:
Dave and Anna aren't coming as Anna is unwell so the chicken mixture and the bought garlic bread are now in the freezer and I've got out one of the individual portions instead, the wine has been hidden away (out of sight, out of mind, and today is back on plan.
B:  the same
SW:  speed and one and a half syns
L:  topless bacon and cheese toastie, salad; fruit
SW:  one healthy extra A, half a healthy extra B, maybe one and a half syns for chutney
D:  chicken pasta bake, salad, sort off garlic bread; yogurt
The pasta bake will be the same, ditto the salad.  I might attempt a sort of garlic bread with garlic granules and spray oil - maybe.
SW:  one healthy extra A, half a healthy extra B, one and a half syns for dressing and half a syn for the yogurt
Summary:
two healthy extra As
one healthy extra B
five syns
Posted by Joy at 05:46:00