Good morning, everyone.
I had a little look in the freezer and emerged with a fair old list of home cooked leftovers to use up before I do any more Simply Cook meals.  I had planned today's dinner before deciding to do a leftovers week but that's OK, I will enjoy it and it works with SW so no problem.  Leftovers week starts properly tomorrow.
Of course, typically, as soon as I had decided this, I read my Sainsbury's magazine and found several likely looking recipes I would like to try.  It's always the way.  Well, they will just have to wait! 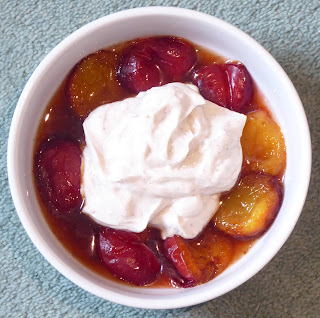 Breakfast
Deelicious!  There was a bit of spiced sugar left so I added it to the yogurt and it was very nice indeed!
I'm going to try the spiced sugar on apples - eating apples because cookers would take too much sugar. 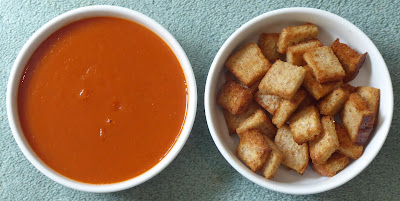 Lunch
I haven't made soup for months because  you know - weather and so on.  This tomato and roasted red pepper soup was lovely with a hint of spice from the Henderson's relish I added.
And the home made croutons hit the spot like a bag of crisps does - crunchy and satisfying.
I'm glad I have some soup left to form the basis of a sauce for the meatballs for dinner today too.
I was really full after this.  They say blended soup fills you up more than chunky soup, I gather.  I kept my fruit until later on when I had an orange. 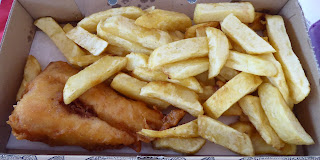 Dinner
This was fish and chips, not a child's portion as that wasn't available.  The fish was not large, it was what I would call a sensible amount and I enjoyed that very much.  It tasted so good.
I didn't eat all the chips.  I guess I left a good half of them.  See the halo? 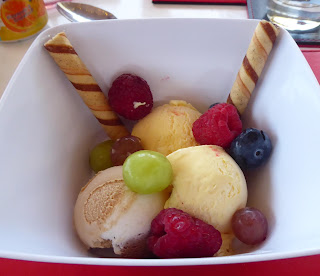 This was a bit naughty, I suppose, but the scoops were pretty small, I didn't go for seconds and it was very nice.

Hopefully, with the lighter meals I had earlier, I didn't go too high in calories yesterday.
Back on track now anyway.
Steps were just over 8,000.

Today's plans:
B:  bacon, egg and tomatoes
The tomatoes are still coming thick and fast and it is no hardship to overdose on them.
SW:  two syns for one tbsp. olive oil to cook the tomatoes in.
L:  chicken salad; fruit
The chicken is leftovers from the last time I had a roast chicken.  Some of it is on the bone so it isn't s much as it looks but, anyway - chicken - no problem.
SW:  one syn for some salad dressing
D:  pasta and meatballs, side salad; yogurt
I plan to make meatballs using a couple of onion and rosemary sausages, 100g either pork or beef mince and maybe some other bits and bobs, including, probably, 10g wholemeal bread crumbs which really does lighten the meatball texture and make them less 'solid'.  The sauce will be the lovely tomato soup leftovers from yesterday with added veg - onion, pepper, mushroom, softened in a tsp oil
I'm hoping to have leftovers for tomorrow's lunch.
SW:  the mince is under 5% so free and protein, the sausages are free, the soup was free, ditto the pasta.  If I add some cheese on top, that will be a healthy extra A and the breadcrumbs aren't enough for any kind of B so one syn.  Also half a syn for some yogurt.
E:  personal training today - lovely!

Summary:
one healthy extra As and I will probably indulge in a couple of café au laits for half an A (unofficially)
no healthy extra Bs
four and a half syns