Good morning, everyone.
Well, weigh in was better than feared; I lost half a pound.  Not much, I know but infinitely better than the gain I rather expected so no complaining and Onward and Downward!
This morning the bloating has gone, thankfully.
Yesterday's meals: 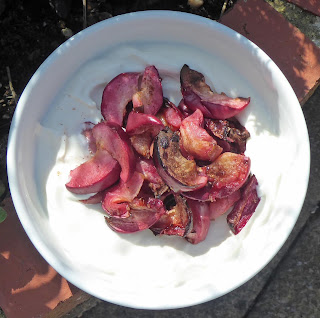 Breakfast
Because eating apples don't really release juice when cooked, the sugar spice mixture turned pleasantly crunchy rather than syrupy.  It was very tasty.
And the 2% Greek yogurt is really very smooth and creamy.
Earlier, after weigh in, I had a banana. 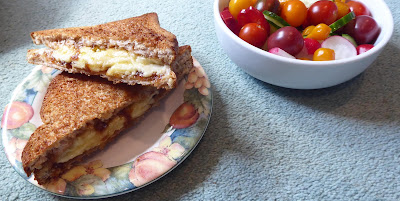 Lunch
I do love a cheese and onion toastie.  This look all my healthy extras plus wo syns for chutney. Well worth it.
Later on, I had an apple
Evening was the chicken makhani but I totally forgot to photo it, so sorry.  Curries seem to improve with time, don't they, even in the freezer!
Yesterdays step were just under 8,000

Today's plans:
B: fruit, yogurt
I've got quite a lot of berries to eat up.
SW:  half a syn for 2% Greek yogurt
L:  egg and pork pies, salad; fruit
I saw this recipe on the SW site and though 'I have to try these' although I will cut down on the amount of mince needed and top up with the onion and rosemary sausages (because I like it)  If you have access to the site, here's the link.  I will most likely add some grated cheese to the egg mixture.
https://member.slimmingworld.co.uk/recipes/egg-and-pork-pies
SW:  the 'pies' are free, half a syn for some spray salad dressing, one healthy extra A for the cheese, half a healthy extra B for some wholemeal breadcrumbs
D:  sort of lasagne, salad; yogurt
This came to me during the SW meeting as Jen was going through the Slimmer of the Week hamper.  One of the items was a can of chicken in white sauce from Aldi, the contents of which are OK but short on chicken and rather bland - but just one syn!
I thought maybe one could strain off the chicken (to have in another meal) and use the white sauce as a lasagne white sauce.  One could add some soft cheese to the mix and sprinkle some grated cheese over the top.
I have some cooked mince in the freezer that I can use so that's sort of working with the leftovers challenge, although it's not really leftovers, it's batch cooking.  The effect is the same though..
Anyway, I am going to give it a go and it will probably make enough for two portions so that's tomorrow sorted out too.
SW:  the can of chicken in white sauce is one syn, the mince is speed and free, I will use one healthy extra's worth of cheese and, perhaps, melt some Primula light into the white sauce for two syns for 25g
E:  a Lindsey clip on YouTube
Summary:
one healthy extra A
half a healthy extra B (for wholemeal breadcrumbs in the lunch - not in the recipe)
Posted by Joy at 07:38:00