Good morning, everyone.
Well - what a result.  Another two and a half pounds off and that's my 'emotional eating' gain sorted!  Onward and downward.
I wasn't the slimmer of the week but, as she couldn't stay and I was the next one down, I got the hamper.  What a good one it was this week too. 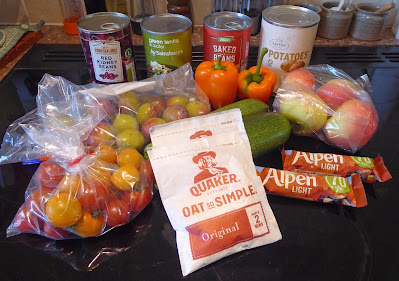 You can see all the goodies here.  Loads of fresh stuff (the tomatoes were my offering and there's some lovely ripe plums behind them) and I will be able to use all the canned things.
Lucky, lucky me! 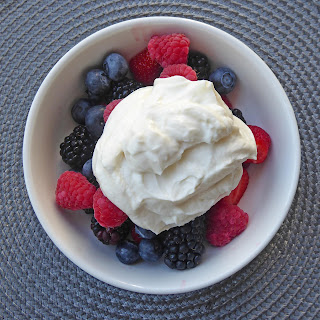 Breakfast.
The berries are strawberries, raspberries, blackberries and blueberries.  I'm making the most of them being in season as they are so nice and later in the year they won't be so good.
I went for 0% yogurt in the end so take away one and a half syns, and flavoured it with Sugarly and vanilla essence.
Later on, I had the two Alpen bars from the raffle so I adapted lunch and dinner to cut out the bread - the bars because my healthy extra B instead. 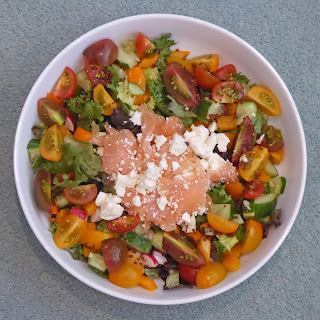 Lunch
A quick look in the fridge revealed a bit of smoked salmon that was three days from use by so I finished that off, with one healthy extra As worth of feta and a tomato heavy salad, followed by three little plums.
So fresh and clean and delicious 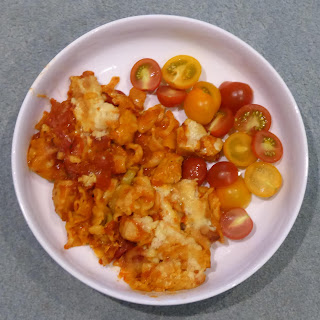 Dinner
Not the prettiest sight in the world with a 'salad' that consisted solely of garden grown tomatoes but I do have a load to use up and, to be honest, it was absolutely scrummy.
I swapped the yogurt for a nectarine.
Steps were just over 7,000

Today's meal plans
B:  bacon and loadsa tomatoes
I'm being 'blessed' with copious numbers of tomatoes at the moment - I've just come in with a load and by the evening there will be loads more.  I will be freezing some whole, for processing  (i.e. cooking and chopping or sieving for soups and passata) over the winter months and, in case you hadn't noticed, they are featuring very strongly in meals at the moment.  Oh, the hardship!!
I'm not having any toast as there will be bread a-plenty for tea.
SW:  protein and speed
L:  leftovers of chicken pasta bake, salad, fruit
There's not a lot left over but enough to make part of a salad.
SW:  half a healthy extra A (cheese), speed and free
D:  afternoon tea with the girls
Totally off plan.  There will be two kinds of sandwiches, Beth-friendly 'sausage' rolls, crisps and other nibbles, scones, jam and cream.   I am taking some Greek yogurt instead of cream but that's my only concession really.
No, I won't go overboard but, yes, I will be enjoying this.  One meal in twenty one, as Jen says.
SW:  off plan and no idea.  I can't even do 'flexible syns' on this one.
E:  Some Lindsey exercises, if it's not too hot.
Summary:
off plan so no idea
I'll be straight back on it again tomorrow morning!  Promise.
Posted by Joy at 06:58:00