Good morning, everyone.
Weigh day today!  I'm not expecting miracles after Tuesday night and I have felt very bloated all week anyway, goodness knows why, but I will be thrilled not to have a small gain.  The rest of the week has been good so - well, let's hope.
Fingers crossed, everyone!
Yesterday's meals: 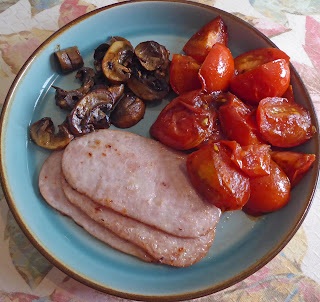 Breakfast
Those turkey rashers may be processed but they're OK with good tomatoes and mushrooms.  I enjoyed this breakfast 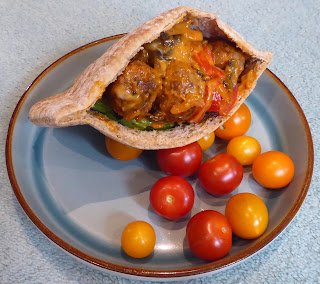 Lunch
This was delicious.  Stuffed down into the pitta is some lettuce and cucumber and I heated up the meatballs and added half an As-worth of Primula light soft cheese which I stirred round until it had melted into the sauce.  Mmmmm, definitely one to do again before long.
Next time I make the meatballs, I might use beef mince or I might use turkey/chicken mince and some grated chorizo for some oomph.
I had an orange and a few little plums later on in the day.
Dinner time came and went and I simply wasn't the least bit hungry.  Nothing to do with being lazy as it was already made, I just didn't want to eat.  I had a yogurt and called it a day.
And this morning I'm still fine, not unusually hungry.  Just one of those things.
Steps were just over 7,000

Today's plans:
B:  fruit and yogurt
I might try some spiced apple today, like the plums of the other day, perhaps using one of those very attractive rosette apples I bought from Lathcoats.
SW:  I will use the Fage 2% Greek yogurt, 170g for one syn and one syn for two tsps demerara sugar
L:   cheese and onion toastie, salad; fruit
As often made . . .
SW:  up to two healthy extra As, one healthy extra B and one and a half syns for onion chutney
D:  chicken makhani, konjac rice; yogurt
I found some konjac rice that must be used soon.  It's not as nice as real rice but then it has no carbs and is low calorie (although it has to be synned) and I have it in to use!  I might knock up a simple quick pickled tomato and onion salad thing for the side.
(all copied straight from yesterday as I didn't have it then)
SW:  one syn for the konjac rice, two syns for the chicken makhani, half a syn for the yogurt
E:  a walk
Summary:
up to two healthy extra As
one healthy extra B
six syns
Posted by Joy at 05:57:00