Good morning, everyone.
All is well after Saturday's little self indulgence, thankfully.  Yesterday was fully back on track again and it's a new week . . .
Yesterday's meals: 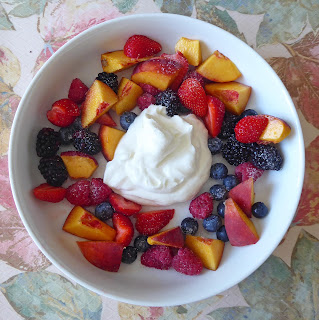 Breakfast
I was just going to have the berries - blue, black, straw and rasp - but a peach was nicely squidgy and would be starting to go off so I included that too and it was all lovely! 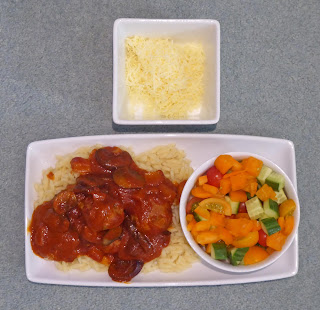 Lunch
Not great light for this photo because all the curtains were closed but these experimental meatballs were absolutely delicious.  Two Linda McCartney red onion and rosemary sausages and two lean bacon medallions.  Finely chop the medallions and squish them into the sausages, form meatballs, chill and then cook - I used Ninja, around 160 on air fry for about ten minutes.  I already had the sauce in the freezer and I added some pepper and mushroom to it before dropping in the cooked meatballs and simmering them, covered, while the orzo cooked.
I will be doing that again, maybe adding some chicken or turkey mince or some beef or pork mince.
It made five meatballs and, with 40g (dry weight) of orzo, 30g grated cheddar and a simple choppy salad of pepper, cucumber and tomatoes, it was so filling it kept me going all afternoon.
(I used LM sausages because I had an opened box in the freezer but, when they are gone, I will be using the Aldi duplicate - just as nice and better value.) 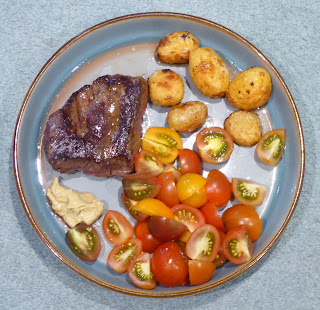 Dinner
Steak, roasties and tomatoes.  I didn't do the corn on the cob; I can have that another time.

I finished off with a yogurt and that was the day's eating.
Steps were very low yesterday as I was keeping quite still because of the heat.

Today's meal plans
B:  breakfast frittata, tomatoes on the side
I opened a can of potatoes yesterday so I have them to use up.  As I love a frittata, I thought I'd make a little-ish one for breakfast, using a small oven proof dish and seeing if it would do in the Ninja.
SW:  one healthy extra A for some grated cheese
L:  nyonya curry, salad; fruit
This is one of the Simply Cook meal portions from the freezer and I need to get them used up because I've got another box of kits coming very soon.  Not that it is any hardship, of course!
I'll just have the curry with a side salad, no added rice.
SW:  seven syns for the curry - ouch.
D:  cottage pie, veg; yogurt
I have those potatoes to use up and I have cooked mince in the freezer.  I'll just add some more veg to the mince, reheat it, pop it in an ovenproof dish, slice the potatoes and layer them on top, spray them and let them brown and crisp, either in the oven or in the Ninja.
It might make enough for two portions . . .
SW:  half a syn for a Mullerlight
E:  Circuits
Summary:
one healthy extra A
no Bs
seven and a half syns
Posted by Joy at 06:38:00