Good morning, everyone.
The new Simply Cook box arrive yesterday - very exciting,  It contains:
Teriyaki salmon donbury - I have no idea what the 'donbury' bit means but I'm sure it will be nice.
Penne alla rusticana - this has chorizo instead of mince but I will probably use just a bit of chorizo and make up with pork mince
Beef massaman - I got a kit for four rather than two - it costs the same - and will keep it for when I have friends round.
Mexican pork one pot - which looks lovely with pork mince, black beans, apple and spring onion - mmmm.
They all look nice but I won't be making any up today.
Working out the syns for these Simply Cook meals is proving tricky.  Some are on the SW site but lots aren't.  I'm taking the approach of  making them as SW friendly as I can, such as using spray oil, skipping optional butter, etc, and using 5% yogurt instead of cream when possible.  If I keep the rest of the day really low syn and based around speed food and lean protein, I should be OK, however high the syns might be. 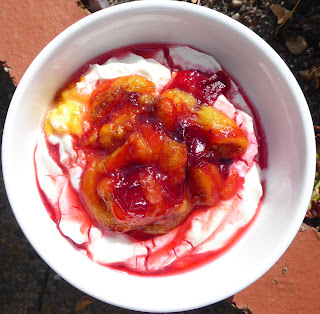 Breakfast
I think I have found another favourite breakfast - spiced plums and yogurt
I halved four small plums and removed the stone, laying the fruit skin down in a small oven proof dish that fits in the Ninja.  Then I measured one level tbsp demerara sugar (three syns) with a couple of good pinches of mixed spice and mixed them together.  I sprinkled the mix onto each plum (it only used up half so that's one and a half syns and some left for another day) before putting the tray in the ninja and roasting at 160C for around eight minutes or so.
While that was cooking I mixed together some 0% Greek yogurt, some vanilla essence and some sugarly before spooning it into a bowl and adding the cooked plums, now soft and juicy.  Because I had added a bit of sugar, there was some proper syrup, not just juice and it was very, very good. 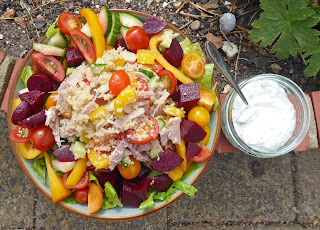 Lunch
This looks such a big old portion but, I kid you not, it's 20g (dry weight) of couscous, some cooked ham, shredded, and the rest is all speed vegetables.  Apart from the minty dressing, of course!
And it was scrummy.
I had no room for afters so had some plums much later in the afternoon. 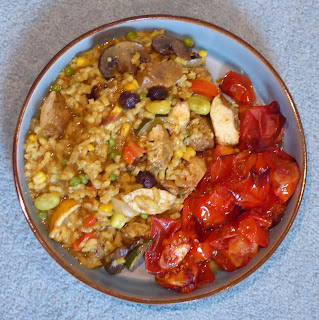 Dinner
This was what I made with the other half of the Schwartz Spanish chicken and rice mix.  At first I was just going basic but then I decided to make the full 'half quantity', including rice (which I usually reduce in amount) and also add plenty of veg.
So I used onion, spring onion, peppers, mushrooms, peas, corn, broad beans, courgette and mushroom (plus the tomatoes on the side).  I added some chicken stock powder because I was just reheating chicken rather than cooking it, and also some chilli puree and garlic granules.
It made FOUR portions!!  What I had looks loads but the plate is quite small, to be fair.
I added some of the leftover Moroccan chicken from yesterday, cut up a bit more to go further.
It was so, so good and I had no room for any dessert.
I ought to add that last time I had to use basmati rice because I was out of risotto rice.  This time I used risotto rice and it did make a difference.  Both ways are nice though.
Steps today have been just over 10,500 which is pretty good for a stay at home day.

Today's plans:
B:  fruit and yogurt
I have berries that really need using up and will enjoy this.
SW:  I'll use 0% yogurt so it's all speed/free
L:   shakshuka; fruit
I have loads of tomatoes still so I'm going to make some sort of shakshuka.  The BBC Good Food site has a nice, simple recipe:
https://www.bbcgoodfood.com/recipes/shakshuka
I'll more or less follow this although I'll be using spray oil and no sugar as my garden tomatoes are lovely and sweet. And there's no way any leaf coriander will see the inside of my house either!  Horrid stuff.  :-)  Maybe some spinach, if I can find any in the freezer - I'm not terribly fond of spinach but it does have its place.
The pan I will have to use will hold enough for two so I'll save some of the tomato mixture for dinner.
I ought to use up some healthy extra so I'll have a pitta for dunking, I think.
SW:  should all be free and speed
D:  steak, roasted veg, tomatoes; Mullerlight
Just what it says  . . . a small fillet steak as a Sunday treat.
I have squash, sweet potato, onion, pepper, courgette and mushrooms for the roasted veg - I dearly love roasted veg.
SW:  half a syn for the yogurt and half a syn for a tsp mustard
E:  a walk
Summary:
no healthy extra As (but I am having yogurt and will probably have a few cafe au laits -  two is half an A but not officially!)
one healthy extra B
one syn
Posted by Joy at 07:19:00