Good morning, everyone.
I'm going to be very careful most of today because, this evening, we're having another Girls' Night, in J's garden, a fish and chip supper this time.  Can't wait - the last time I had fish and chips was at Southwold in May.
Syns?  What are syns?  :-)
I seem to be building up quite a stock of frozen leftovers meals.  Next week, I think I will have a week where I base most of the main meals, if not all of them, on using up those leftovers.  It's all lovely stuff and no hardship - quite the opposite, in fact.  The hardest bit is remembering to take them out of the freezer in good time!
I used the Fage 2% Greek yogurt on my one-pot last night.  It's good, very nice.  Not as creamy textured as the 5% but not that far off.  I've never seen it in Morrisons so I might have to go over to Sainsbury's fairly regularly - oh, the hardship! 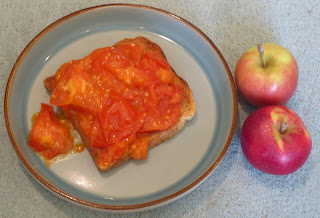 Breakfast
Tomatoes on toast and a couple of small apples. 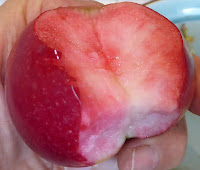 I just have to show you this.  I went over to Lathcoat's, our local PYO.  They specialise in apples (which aren't PYO) and their earlies are now in the farm shop.  This is a Rosette apple and it's a delicious pink all the way through, flesh as well as skin.  Most attractive, both in looks and in flavour. 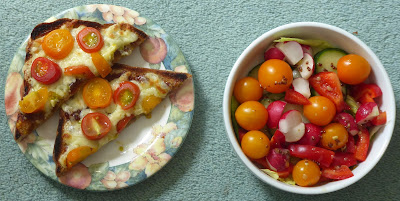 Lunch
Yummy.  Basically cheese on toast with a salad and it was lovely.
Later on, I had some plums.
(I have a lot of plums, most of which are now halved, stoned and frozen.  Nice for winter.  Spiced plums and porridge - lovely!) 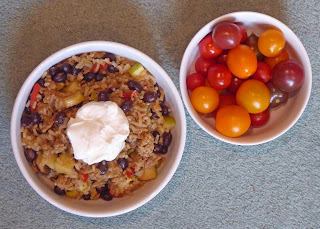 Dinner
This was the Simply Cook Mexican pork one-pot and it was absolutely gorgeous.  I did add onion, pepper and mushroom, as planned, and I used the whole two portions quantities which has made three good portions.  It wasn't overly spicy - I might add a bit of chilli puree when I reheat the leftover portions.
I really don't know how it works with Slimming World but all the ingredients were speed/free/protein and it was all spice mixes and stock, not syrup of any kind so it really has to be OK.
It was very filling.  I didn't eat all the tomatoes and I didn't want any yogurt afterwards.
Definitely one to get again.
It was a very red/orange day yesterday, wasn't it.  I blame the tomatoes!

I didn't wear my watch so have no idea of steps.

Today's plans:
B:  fruit and yogurt
I have plenty of plums after picking some at Lathcoat's yesterday so maybe I will do those spiced plums again.
SW:  I don't syn cooked fruit if it is speed/free when raw (ditto for puree-ing fruit).  The sugar spice topping is one syn (a bit less in fact but let's call it one).  The rest is speed and free (I shall use the 0% yogurt)
L:  home made tomato and red pepper soup, croutons; fruit
Trying to keep the meals low but tasty so this evening doesn't do too much damage.  I'll make the croutons in the Ninja, as usual.
The soup is tomatoes, red peppers, onion, carrot and chicken stock, plus seasonings, all boiled up together and then blended and pushed through a sieve to get rid of any remaining pulp.  Simple and really tasty.

SW:  the soup is all speed/free, the croutons will be one healthy extra B
D:  fish and chip supper with the girls
I'll just have to choose very carefully, won't I?  Fortunately, I can't eat nearly as much as I used to be able to so that will help.
SW:  not the foggiest.  It will be over syn but, hopefully, the calories will be OK, especially as breakfast and lunch are pretty low.
E:  Groove aerobics
Summary:
off plan because of dinner - however . . .
no planned healthy extra As
one planned healthy extra B
one planned syn
This gives me reasonable leeway, doesn't it?
Posted by Joy at 07:13:00