Good morning, everyone.
We're over the Bank Holiday weekend, it's nearly September and the start of a new season and this month hasn't been too bad really.  I started on a gain from the month before but am five and a half pounds down from then so I'm very happy with that.  At my age and with not an awful lot to use, progress is slow but at least there has been progress this last month and, on the way, I have enjoyed some delicious meals, discovered a few new ideas and found a healthy place to eat out.
All reasons to be very happy with things. 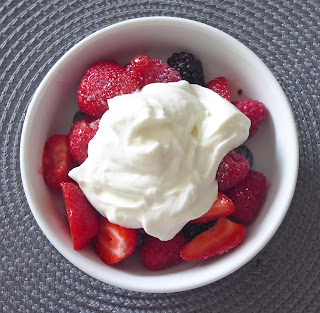 Breakfast
The usual berries and yogurt and very nice it was too! 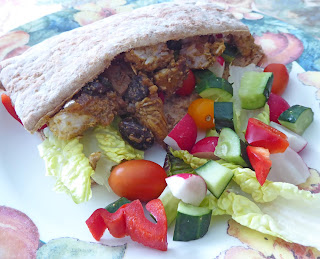 Lunch
Leftovers of Moroccan chicken with veg in a pitta.  It's surprising how filling things like that can be.
Then I had a nectarine and, later on, an apple. 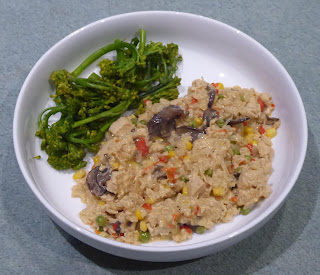 Dinner
This is how I used the chicken that I had strained off from the white sauce.  In the end, I turned it into a rather tasty risotto rather than using pasta, with onion, pepper, mushroom, peas and corn, 20g dry weight of risotto rice, a small pot of home made chicken stock (from the freezer - tick) and about 25g not-Parmesan plus some rather tatty, must-be-used-up broccoli on the side.
I really enjoyed it.
Them for once, I had the planned yogurt.
Not many steps yesterday - just under 4000.  Ooops

Today's plans:
B:  black forest overnight weetabix
I saw this on a vlog and it sounded so good.
Basically, the night before, mush up a couple of choccy weetabix with just enough milk to soften and smooth into the bottom of a pot or container of some kind.  Spread some Greek yogurt over the top (which can be flavoured if you want and then pop over some frozen cherries.  Cover and pop in the fridge until wanted.  Add some choccy sauce before eating.
SW:  one healthy extra B, half a syn for 2% Greek yogurt and a tbsp of the Groovy Food Co choccy sauce is one and a half syns (may not want a whole tbsp, it seems to go a long way).  The milk can be part of a healthy extra A
L:  sticky chicken salad; fruit
The sticky chicken is a SW thing and is, basically, honey, balsamic vinegar and soy sauce.  The thought makes my mouth water.  Yum.
I might use agave nectar instead of honey - or maybe maple syrup.  I love it all!
Some of the chicken breasts I have in the freezer are pretty large so I will defrost one and split it between lunch and dinner.
SW:  it says two syns per portion.  The rest should be speed/free/protein.
D: Spanish rice and veg with chicken; yogurt
I cooked the Spanish rice without chicken so I will also cook some chicken breast and either mix it in or have it on top - might dust it with some smoked paprika or some fajita seasoning first.
SW:  the main should be protein/speed/free and the yogurt will be half a syn
E:  a walk and some Lindsey exercise clips.