Good morning, everyone.
I maintained at Group yesterday.  That's OK, I've given up stressing about results.  It messes with my head and doesn't have any positive results so a waste of time and emotional energy really.
Onward and downward!
Both the things I took for the taster worked out well and I will do them as separate menu posts at some point soon. 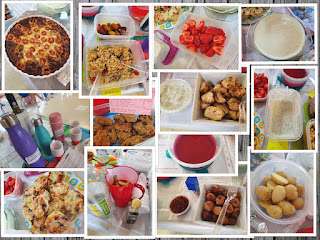 Breakfast
. . . was the taster session at SW Group.  There was some lovely stuff so I've done a montage of all Jen's photos.  I tasted pretty much everything. 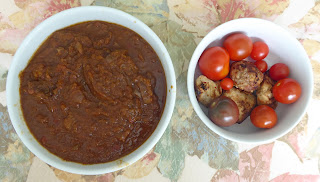 Lunch
There was just a bit left over so I decided to have a protein heavy lunch, finishing off the few taster bits and the beef tagine.  Odd and low on speed so I also munched on some garden tomatoes instead of fruit for afters.
Oddly, I didn't really enjoy the beef - I ate the meat but, unusually for me, chucked away most of the gravy.  Oh, well, can't win them all.  I wasn't feeling all that hungry after the lavish breakfast either - that won't have helped.
I had some plums that friend, Chris, gave me from her Mum's tree later on.  Delicious. 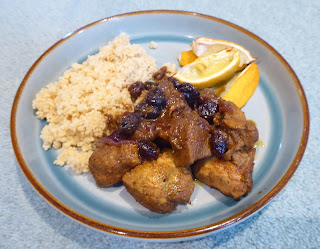 Dinner
This was the Moroccan chicken with couscous and it was simply delicious.  Very, very easy too.  I managed to eke it out to four portions as the two chicken breasts were pretty large, so it comes out as four and a half syns each.
The recipe was way out on the couscous though.  It said 150g dry which sounded an awful lot, 75g each.  So I weighed out 40g and what you see on the plate is half of that.
It is most definitely something I will be ordering from Simply Cook again.
Which reminds me - I should be getting the next box from Simply Cook in the next few days.  I might do another post about it at some point soon.
Steps came to 7,500 which, for a lazy day, is pretty good.  There aren't many days when I don't reach my 5,000 expectation (NOT a target!)

Today's meal plans
B:  roasted plums and yogurt
A bit of a make up, I will try halving and de-stoning some plums, sprinkling them with a bit of sugar (naughty) and some mixed spice and roasting them in Ninja, on a 'tray' of foil so I don't lose the juices.  Fingers crossed.
SW:  I'm not synning plums just because they are cooked, but the sugar will be three syns for a level tbsp.  I think I will use 0% yogurt instead of 5% so that's SW free.
L:  ham and veg couscous, salad; fruit
I have a little bit of cooked ham which I can chop and mix into the leftover couscous together with some chopped salad veg and some minty yogurt dressing left over from the taster.  Waste not . . .
Those plums Chris gave me are absolutely delicious so I'm looking forward to them!
SW:  around one syn for the dressing
D:  Spanish chicken, tomatoes; yogurt
Another based on leftovers.  I have half the sachet of Schwartz Spanish chicken mix and what I will do is make it up with the required amounts but not cook any chicken.,  Instead, I will add some chicken stock powder for flavour, also add some Ninja roasted veg and another portion of the Moroccan chicken, sort of shredded, at the end.  A right mix of flavours, I know, but it should work fine.
SW:  the packet mix is free, one portion of the Moroccan chicken is four and a half syns and the yogurt is half a syn
E:  YouTube sessions today!
Summary:
bit low on the healthy extras - ooops!
nine syns
Posted by Joy at 06:46:00