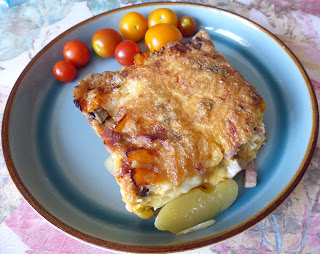 Breakfast
Breakfast tortilla - this worked well and I have a bit left over for lunch today.
It was so easy to do in the Ninja after softening some bacon, pepper and mushroom in a small pan 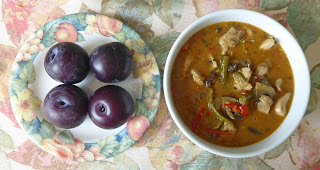 Lunch
The nyonya curry which was more like a soup than a curry but ever so nice, all the same.
The plums for afters were lovely too.

Later on, I had another plum and I ate tomatoes as if they were sweets pretty much all day. 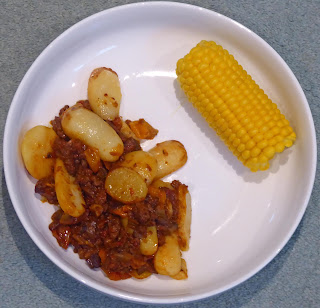 Dinner
Cottage pie and some sweet corn.  I added more speed veg to the basic cooked mince.
Noting special; but really nice all the same.

I had a yogurt and a peach for dessert.
The step count was around 8,000 which is fine considering I didn't put the watch on until about half past eleven.

Today's meal plans
B:  tomatoes on toast, mushrooms on the side
Perfect for after a Groove session
SW:  half a healthy extra B for one slice of toast
L:  leftovers, tomatoes; fruit
There's leftover breakfast tortilla and cottage pie so I will finish them both off with some tomatoes, cucumber and peppers on the side.  An odd mix, I know, but easy and frugal.
SW:  there's barely enough cheese on the tortilla to count even as as half an A so I'm calling it two syns for safety.
D:  bbq tandoori chicken with Bombay style sweet potatoes, salad; yogurt
This is another of the Simply Cook kits so I'm excited to try it and see how it goes - I haven't tried a bad one yet!
It isn't on the SW site but I have noticed that, while the recipe card gives the calories made up according to the recipe, on the spice box it gives the calories just for the spices - very helpful.  It's a bit ad hoc but better than a total guess!
As with all these kits, it makes enough for two (plus) so that sorts out a meal tomorrow as well.  I just hope I have enough suitable chicken in the freezer.
SW:  two and a half syns for the kit spices (the actual ingredients are all speed/protein/free), half a syn for some 5% yogurt and half for a dessert yogurt
E:  Groove aerobics
Summary:
no healthy extra As
half a healthy extra B
five and a half syns
Posted by Joy at 05:05:00