Good morning, everyone.
It is Slimming World and weigh in this morning and what will be, will be.
It's also a taster session and I've made a couple of things, both sort of buffet/picnic type stuff and I'll take along some Crucials bbq sauce for the sausage and bacon balls and some yogurt mint sauce for the spicy chicken chunks - The bbq sauce was going to be ketchup until I looked at the use by date - ooops.  Ketchup is now on the shopping list!
If there's a lot left, that will do me for dinner and I'll do the Moroccan chicken another day. 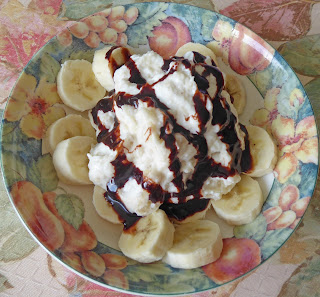 Breakfast
This was absolutely gorgeous.
I stewed one cooking apple in a little water and added Sugarly to taste once it was cooked.
When it had cooled, I mixed it into 100g 5% Greek yogurt (one and a half syns).
I sliced a banana into the bowl, spooned over the yogurt mixture and topped it with 10g Groovy Food chocolate sauce for another one and a half syns.
Absolutely delicious!
Later on, I had a plum. 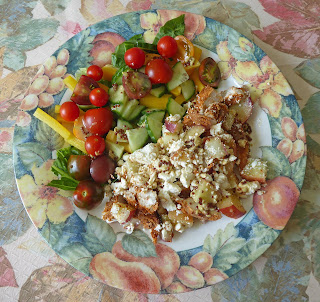 Lunch
This was nice too.  I totally forgot about making the croutons but it was incredibly filling without them.
I really wasn't hungry for the rest of the day and the thought of beef tagine made me feel a bit yuck so I had some fruit and a yogurt in the evening and that did me fine.  I didn't take any photos.
Just over 5,500 steps yesterday but I did have to take my watch off and recharge it mid-afternoon.

Today's meal plans
B:  taster at SW - that will be my breakfast
SW:  no idea about syns, etc, but it won't be many at all.
L:  beef tagine; fruit
It has to be used up now it has thawed.  Just the tagine on its own should be fine for lunch
SW:  two syns
D:  Moroccan chicken; yogurt
Another Simply Cook meal, I have to make this work for three portions or it's rather syn heavy.
Although - if there's stuff leftover from taster this morning, I will have that instead.
SW:  six syns for the recipe
E:  a walk

Summary:
No idea at present; it rather depends on what people bring in with them.