Morning, everyone!
Still back on track.  Phew. 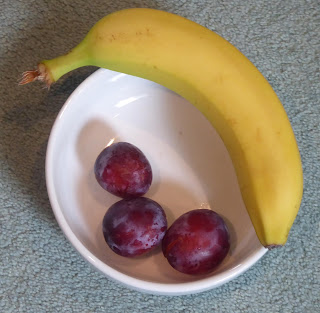 Breakfast.
Plans changed.  I had an apple before I went out to do some shopping and when I got home I was short of time before going to circuits so I had this and everything else dropped down a meal. 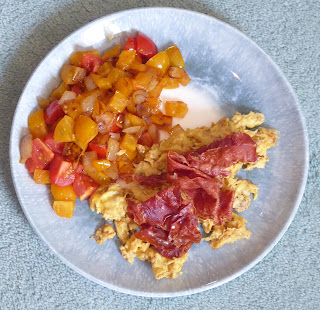 Lunch.
Because it was lunch, I had onion, pepper and tomato instead of just the tomatoes I had planned with the scrambled eggs.
It was lovely.
Dessert was a nectarine.

Dinner.
Half of the left over chicken makhani with added veg, a pitta and salad.
(The other leftovers is now in the freezer)
Dessert was a Mullerlight as planned.
A bit later, I had an apple - well, half an apple as it needed bits cutting off before using up.

Today's plans:
B:  banana, fruit and yogurt
I'll have the banana before Groove and the rest afterwards
SW:  half a syn for the yogurt
L:  smoked salmon and cucumber sandwiches, finger salad; fruit
Lovely stuff!!
SW:  half a healthy extra A (for cheese spread), one healthy extra B
D:  loaded chips, salad; yogurt
I currently have some savoury mince in the slow cooker and by this evening it should be gorgeous.  It's a batch so there will be some portions for the freezer; I noticed I was pretty much out of cooked savoury mince and it is so useful for so many different meals.
The loaded chips is really just chips and mince with grated cheese over.  Easy peasy once you have the mince cooked.
SW:  one and a half healthy extra As and half a syn for the yogurt
E:  Groove today
Summary:
two healthy extra As
one healthy extra B
one syn
Posted by Joy at 06:29:00