I'm really looking forward to going to Itsu with Beth this evening.  I've looked at the menu online and t gives the calories which is helpful.  I have to say, it all looks extremely delicious AND healthy - it would be great to find an eating house that does properly healthy food, not just smaller portions of the same fatty, carb laden, chip heavy pub grub (with inflated prices to match).
Mind you, I have no ideas of cost but Beth and Alex go often so it can't be so bad really.
Exciting!

Have you ever eaten at Itsu?  What did you think? 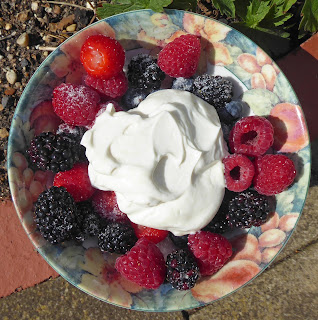 Breakfast
The usual four berries with some flavoured yogurt - I used vanilla essence and some Sugarly.
Much more filling than it looks. 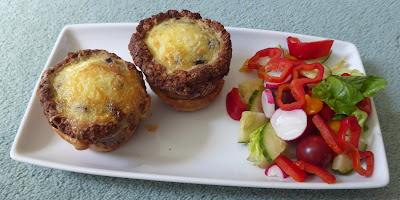 Lunch
These egg and pork pies were absolutely gorgeous.  One would have been enough!
The outside is 100g pork mince, two onion and rosemary sausage, 30g wholemeal breadcrumbs, pepper, garlic granules, fajita spice and a good shake of soy sauce.  This made enough to make both pies plus a patty for breakfast tomorrow.
Just oil two holes in a muffin tin and press in the mix, bringing it up up above the top - if does stay there.
The inside was two eggs, beaten, with about 7g finely grated cheese, garlic granules, mustard powder, salt and pepper plus a small amount of finely chopped and softened onion, red pepper and mushroom.
Pre-cook the shells, then pour in the egg and veg, top with half a little tomato (which sinks down into the middle to add a burst of juice and sprinkle on the rest of 15g finely grated cheddar.  Then bake until done.
So good and would be great for a picnic. 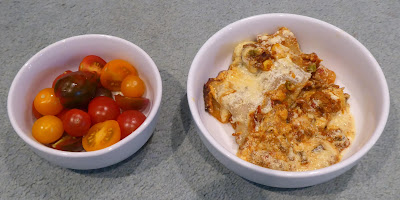 Dinner
The lasagne and the question is did my idea of using the canned chicken sauce work?  Well, sort of.  It went rather thin so as well as the Primula light, I also added a few thickening granules - not that they did much thickening but it all helps.  It all tested rather good, even though the sauce split, strangely.
It actually made three portions so that's one yesterday, one for today and one for the freezer, annoyingly!  I also have the strained chicken, still in a bit of sauce, plenty for one portion and I will have that on Monday with some pasta, I think.
That was it for the day - I was too full for anything more.

Today's plans:
B:  pork patty, mushrooms and tomatoes
When I made the egg and pork pies yesterday, there was just enough of the meaty mix to make a not-terribly-big patty.
SW:  I counted all the syns yesterday and it's so little anyway, it would hardly count.  One syn for a dsp of chutney on the patty
L:   leftovers of lasagne with salad; fruit
. . . and very nice too!
SW:  half a healthy extra A and let's call it two syns to be on the safe side - I don't think it is, being just a third, but no worries
D:  something at Itsu
It should be healthy, work with SW and be really delicious.
Here's a link to the menu - I have no idea as I've never been, but the chicken'low looks gorgeous!
https://www.itsu.com/menu/
I've looked on the SW site and, while it doesn't give the syns for many meals, it does for some and none of them break the syn bank at all so that's great!
SW:  I don't know yet.  It all looks great and look at those calories - very little that is too high!
E:  a walk
Summary:
one healthy extra A (I shall have a couple of café au laits to make up the other half healthy extra)
no Bs
one and a half planned syns which leaves me plenty of leeway for this evening.  I'm sure to stay within syns, given the nature of the food
Posted by Joy at 07:13:00