Morning, everyone!
Half way through the week and all's well at Chateau Slimming World!  It rather puzzles me how sometimes it can be so very straightforward and sometimes such a struggle.  Weird.
Yesterday's meals: 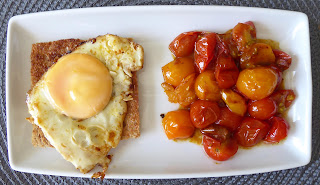 Breakfast
I rarely make toast nowadays.  Instead, I spray the slice of bread with spray oil and pop it in the pan to brown and crisp.  Yesterday, I kept it warm while I then cooked the tomatoes in the same pan, and then the egg.
I overcooked the egg, I know, but it was all delicious anyway!  Eggs are good, however you do them. 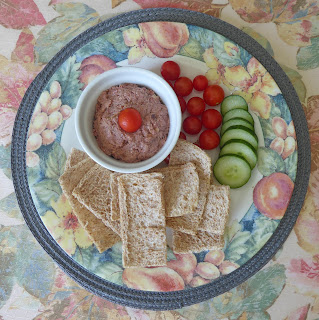 Lunch
The corned beef pate worked really well.  I will definitely be doing it again and, maybe, add some horseradish to it next time, rather than chutney.  It made an awful lot - maybe, next time, I'll divide the contents of the can into thirds.
I added three syns to the daily total with another slice of bread.
Afters was a nectarine and later on I had a flat peach. 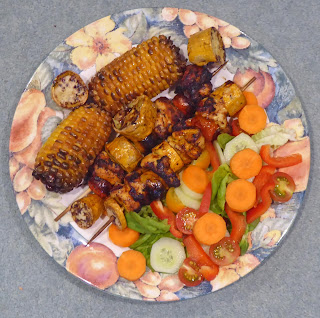 Dinner
This was a big old plate of food, basically some chicken breast and a shedload of veg - sweetcorn, courgette, tomatoes, salad leaves, pepper, cucumber and carrot.  So good!
It looks burnt but it's more a sort of bbq charring effect - it didn't taste burnt except for the very edges of the corn.  It all had twenty minutes in the Ninja and I think probably seventeen would have been better.
The Schwartz rub was so delicious - I will use some of what's left to dust a battered out chicken breast sometime soon  - like an escalope but without breadcrumbs.
I was absolutely stuffed so no room for the planned dessert.