The first in an occasional 'series'; what I bought this week.
At the moment I have a freezer and fridge full of stuff so my shopping basket shouldn't be too heavy, should it?
You'd be surprised.  Maybe doing this will help me to rein back a bit . . .

I got all this at Sainsbury's. 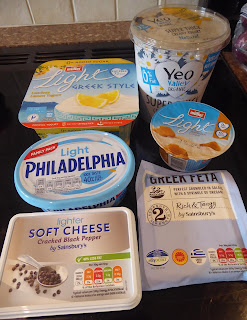 Dairy:
I get through a lot of dairy, one way and another.

The flavoured yogurts are lemon (I dearly love lemon) and one toffee.  These are half a syn per pot.
I think the Yeo 0% is the nicest 0% Greek yogurt you can buy except for Liberte which you can no longer get around here (and it's cheaper than Liberte).  I get through a lot so it's a large pot.  0% Greek yogurt is a free food on SW.
I got some light soft cheese.  These are no longer an A choice but the Philly is two syns for 25g while the soft cheese with black pepper is the same.  It's really nice used instead of butter or melted over things, in sauces or on pasta.
I always like to have some feta around, it's a very useful cheese for sprinkling over salads, etc, and it's a healthy extra A. 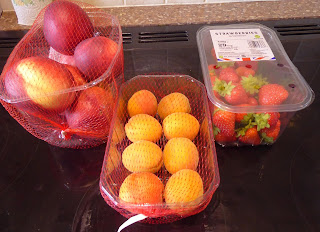 Fruit and veg:
Not loads this week because I have fruit and veg left over from last week and now that the garden and allotment are producing, that keeps me supplied.
I didn't really need three punnets but these fruits won't be so nice for much longer so I am making the most.   From left to right, nectarines, apricots and strawberries, all speed food on SW. 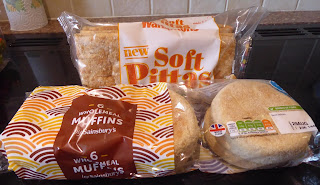 Carbs or Healthy Bs.
That's how I think of bread, etc, now.
I actually prefer the wholemeal versions of breads - more taste, more texture, fills me up more.
The muffins are a standard for me.  I wrap them individually and freeze them but I ran out ages ago and didn't get round to getting any more.  One muffin is a healthy extra B or six syns (edited:  no it isn't, it is seven and a half syns).
I've been on the lookout for these soft pittas for ages but Morrisons don't stock them.  Everyone says they are really nice.  One is a healthy extra B or seven and a half syns.

Drinks:
I am very naughty and drink far too many zero sugar fizzy drinks.  In fact I need to try and cut down as they are not the healthiest thing around and I have no objections to plain water so no excuses.

I thought this looked nice so got it to try but it's not as nice as it looks.  It's OK but . . . not again.  All the zero sugar drinks are free on SW. 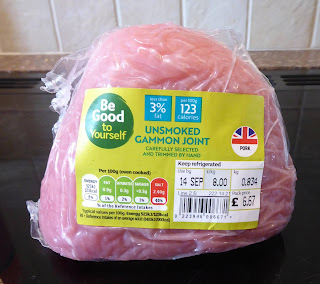 Meat, fish, etc
I have loads in the freezer but pretty much all single portions.  However, Beth and Al are round for Sunday dinner so I got this gammon joint which looked really nice for me and Alex (Beth will have a Higgidy pie, no photo because it's not for me) and I thought I'd pop it in the slow cooker overnight with some diet cola and various aromatics.
It's not a huge joint but there should be some leftovers for Monday.  I'm thinking salad, of course, with pasta or rice, in quiche . . . it won't go to waste, that's for sure.

And finally, for the cupboard.
The baharat spice is because I want to make one of the Hello Fresh meals again - more than once, it was so lovely - and it had a sachet of 'North Indian spice mix'.  I Googled and it said either za-atar or baharat spice would do as a substitute.
The miso soup paste is for the same reason.  I am assuming that it's pretty much the same thing as the jars of paste and, because it is new to me, I got the cheaper one in terms of cost (although the jar is more economical longer term).  Must look up recipes using miso.
The curry paste is for curries - surprise, surprise!
And the last is so gloriously alliterative, I just HAD to have it.  Wonderful, isn't it?  Also, I am a sucker for anything with 'citrus' in its name, I really am.
Most of the dairy will see me over two weeks or longer, the fruit will go quickly as I get through quite a lot at the moment, the muffins and pitta are for longer term in the freezer, the gammon will be gone by the middle of next week and the spices are also longer term.
So there you are.  My first food haul post.