Morning, everyone.
It's SW meeting today so weigh day - eeeeek!
As always, I will let you know but if I've only lost half a pound again after my hard work this week, I shall 'thqweam and thqweam until I am thick' (to quote a certain Violet Elizabeth Bott). 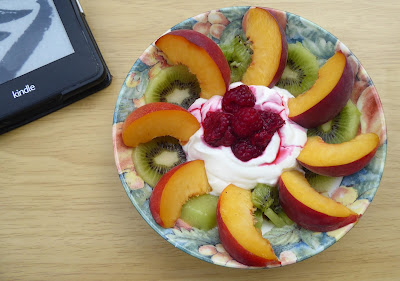 It's a lovely time of year for fruit, isn't it?  The kiwi and the peach were both beautifully ripe and the raspberries were from the allotment.  Lovely breakfast.
I totally forgot about the garden blueberries so I had some of them later on as a little snack. 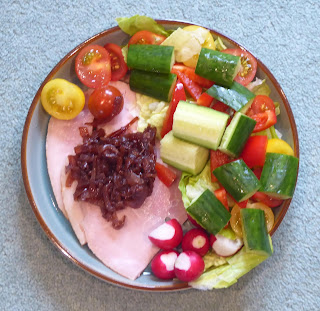 Salads are so lovely and colourful, aren't they?  They look appetising before you even start.
And I am DEFINITELY making more of that chutney/relish.  It is delicious. 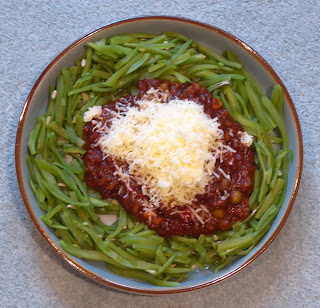 Dinner wasn't as colourful as breakfast and lunch but the bolognaise was packed with veg and very delicious after simmering slowly in the slow cooker all day.  It was supposed to be for two but after packing in lots of veg and some lentils, it was plenty for three at 185 calories and no syns per go.  Perfect for a quick and filling lunch with some konjac rice or a jacket potato.
I finished off with a Mullerlight and didn't want any more all evening.

B:  bacon and tomatoes
This is a blast from the past.  Mum used to pick tomatoes from the garden and fry them in bacon fat that came off some streaky bacon until they were thick and gooey.  We had them with the bacon on top and crusty bread on the side.
No, I'm not doing that.  It would be delicious but in no way SW  friendly.  But I will spray fry my bacon-with-all-the-fat-removed and then, in the same pan that will have bits of flavour on the bottom, add tomatoes picked from the garden.  I might have more bacon than usual, just for memory's sake.   :-)
SW:  should all be free and speed.

L:  beef salad; fruit
I have some slices of roast beef (from the supermarket) to have with salad.  How I am loving my salads at the moment.
SW:  the beef is free, as is the salad and I might have some horseradish for one syn

D:  chicken cheeseburger, chips, tomatoes; yogurt
My second Chicken Challenge meal, this, and I think I will use a flattened out chicken fillet rather than chicken mince.  I can use half a slice of wholemeal bread to make some bread crumbs  or use some panko breadcrumbs which should be a couple of syns, three at most, dust the flattened chicken with some sort of spice mix for added flavour and then egg and breadcrumb before frying in spray oil.  I might even indulge is some cranberry sauce on top plus a slice of applewood cheddar because - Friday evening.
SW:  one healthy extra A for the cheese, one healthy extra B for a wholemeal roll, three syns for the breadcrumbs, cranberry sauce is one and a half syns per tbsp and the dessert will be half a syn