Hi, everyone.
Always on the search for new recipes and ideas, I spent a deliciously enjoyable hour or so thumbing through a Good Housekeeping magazine I bought quite a lot earlier this year called the Fast and Easy Collection.  I now have < counts the list > seventeen definites and quite a lot more maybes to try out.  Well worth the time.

What do you do to keep the interest level high? 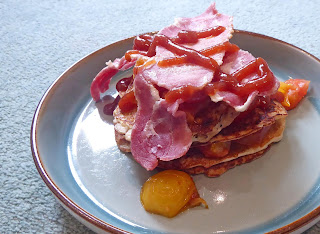 Savoury pancakes with tomatoes and bacon.  Yum!  The pancake mixture made loads (I'd added cheese, of course, so it made more batter than usual) so I had half of them and will freeze the other four for another meal.  I think making a cheesy stack with some savoury mince for a dinner would work really well.
So it was half a healthy B, not a whole B and as I used 30g cheese, half an A as well. 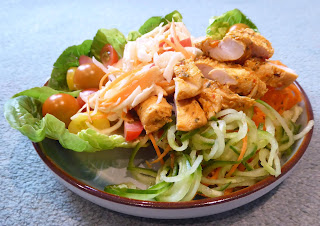 I really should have used a bigger plate, shouldn't I?
I dug out my spiraliser to 'pretty up' the cucumber and carrot.
The mango and lime chicken was really delicious.  Half of the pack was enough so that's two syns rather than three and a half. 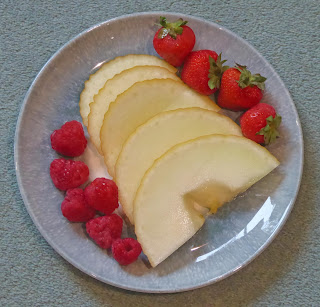 I don't normally post the fruit desserts but this was lovely as well as simple.  The strawberries were just on the OK side of turning so they were extremely sweet and juicy. 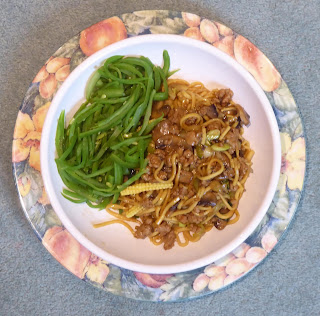 This was another Hello Fresh meal to which I added runner beans and some baby corn.
I've split the left over portion into two and it will do for lunches.
I had yogurt for dessert and, later on, a nectarine.  Not entirely to restricted eating principles but it was lovely!

Today's plans:
B:   bacon, egg, mushrooms and tomatoes
A standard cooked breakfast and very nice with a coffee.
SW:   all speed and free, no syns
L:  smoked salmon pate, crunchy lo-dough triangles, finger salad; fruit
I make the pate by blending some smoked salmon with some philly light, a bit of mayo and maybe a bit of natural yogurt.  I add dill, pepper and lemon juice to the mix.
The crunchy triangles are made by cutting a piece of lo-dough into triangles and baking in the oven until crisp.
SW:  the Philly light will probably be four syns and the mayo one.  The lo dough is two syns which I pay grudgingly!
D:  Hello Fresh panzanella salad with roasted butternut squash and feta cheese
I've had this before and it is really nice.  I've subbed a wholemeal roll for the ciabatta and each portion also needs half a tbsp olive oil which can't really be subbed.
SW:  one healthy extra A and one B plus three syns for the oil and half a syn for yogurt
Summary:
one healthy extra A
one healthy extra B
ten and a half syns