I made this as part of a Hello Fresh delivery and thought it nice enough to reproduce as a recipe.  It was served in a wrap with a side salad but this recipe will just reproduce the chicken part as there are so many ways one could present it. 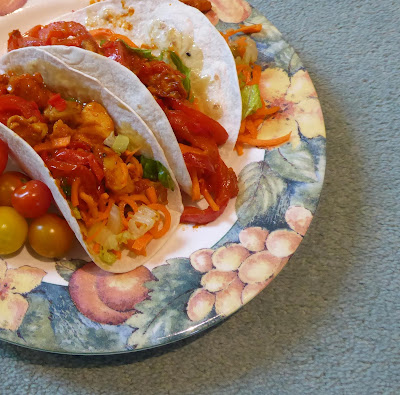 a shallot, peeled, halved and thinly sliced
one red, yellow or orange pepper, seeded and sliced longways
250 to 300g diced chicken (breast or thigh)
a red chilli, deseeded and finely chopped (be careful!)
some garlic (I used puree from a tube)
50g tomato puree
zest and juice of a lemon
40g mango chutney (two and a half syns p.p)
North Indian style spice mix 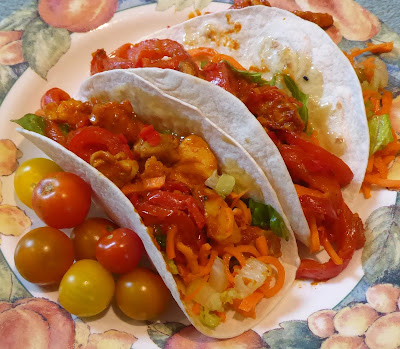 Method:
Spray some oil in a pan and heat.  Add the chicken and red pepper with some salt and pepper and stir fry for around seven or eight minutes until the chicken is cooked all over and the peppers have softened.  Add the shallot, stir well and continue to cook.

In the meanwhile, mix together the garlic, lemon zest, half the lemon juice, tomato puree, North Indian spice mix, some of the chilli to taste and mango chutney.
Once the chicken, etc, is cooked, stir in the mixture and stir well until; it is all combined, then cook until everything is thickened and just starting to stick.  Remove from the heat.

That is the basic recipe.  I served it with a salad made from spiralised carrot, shredded lettuce, some of the chopped chilli and a dressing made from half a tsp extra virgin olive oil and the rest of the lemon juice, half piled onto warm soft shell tacos before adding the chicken mix and the other half on the side with some tomatoes.
The taco shell wraps are small and three syns each or use a SW approved wrap for your healthy extra B.

I looked up North Indian spice mix and it suggested either baharat or za'atar mixes, both of which are easily obtainable, or make your own using half tsp garam masala, quarter tsp each of curry powder, ginger powder, chilli powder and cumin, an eighty of a tsp of sugar and a small, crushed bay leaf.

You could turn it into something North African by using a Moroccan spice mix and serving it with couscous.  Quite a flexible recipe, in fact. 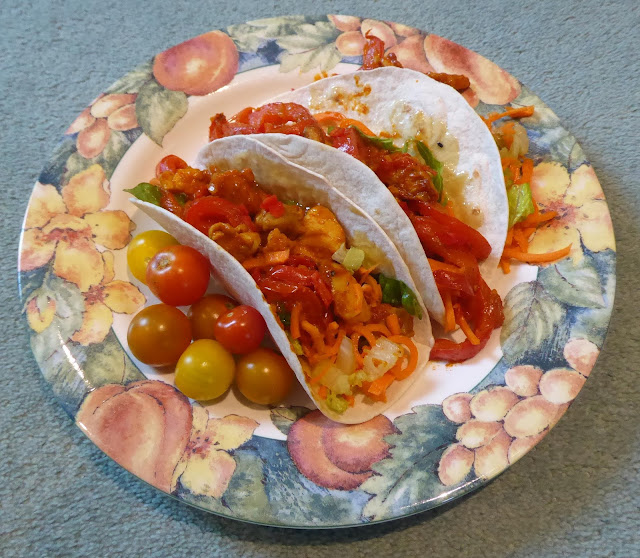