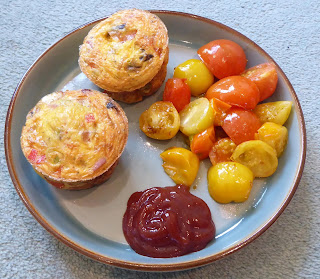 Nice and filling before personal training - breakfast muffing consisting of two medium eggs, a tbsp nutritional yeast and seasonings of choice while the other fillings were chopped bacon, red pepper, spring onion, mushroom and a bit of chopped chilli.  Delicious and just one syn for the nooch. 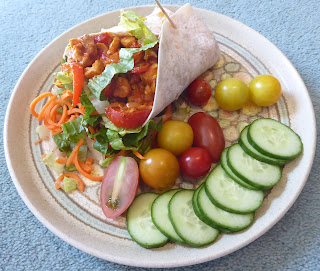 The other half of yesterday's dinner with a WW wrap for a B choice rather than the soft taco shells.  So, so tasty and I have posted separately about this recipe.
Then I had a couple of easy peelers. 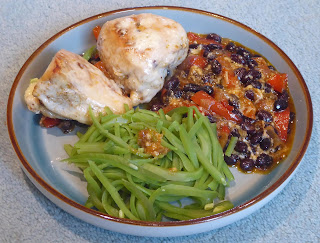 This is the Santa Fe chicken.  Not too many ingredients, very easy to make and it was absolutely delicious.
I didn't have any taco spice so I used Cajun spice instead.  I used a lot more cheese than it said - 45g for one and a half As.
When I tasted it, it did seem a bit too hot (it does have cayenne!) so I added a dollop of Greek yogurt and wow.  So gorgeous.  Another I am definitely going to make again or adapt it, it was a real taste treat.
I was well full afterwards so decided to give the planned Mullerlight a miss.

B:  fruit and yogurt
SW:  half a syn if I use Mullerlight

L:  cheesy chicken and onion toastie, salad; fruit
I haven't had a toastie for ages so I'm really looking forward to this.  I have a pack of cooked chicken and the whole pack is one and a half syns so I might just possibly indulge.  I'll use both healthy extras on the cheese because . . . it's a toastie.  You NEED cheese!
SW:  two healthy extra As and one B, one and a half syns for the chicken (if I have it all) and half a syn for the home made balsamic onion chutney (must make some more).

D:  black bean chilli, konjac rice, salad; yogurt
I can't say I am, terribly excited about this but I have black beans to use up and all the ingredients to hand.  It might surprise me.  It asks for soured cream - I have some half fat crème fraiche instead.
(A friend has suggested I use lentils as well - I will ponder on that idea)
Another friend pointed me to a SW recipe for chicken in black bean sauce and that's also on the list of recipes to make.

SW:  one syn for a tsp brown sugar and one for the konjac rice.  A level tbsp crème fraiche is one and a half syns and half a syn for dessert