Good morning and a happy Bank Holiday to you.
I didn't track calories yesterday.  Weighing portions becomes an issue when one has guests for lunch and I do like to put everything in serving dished so that everyone can help themselves at the table.  Producing scales at that point would be inappropriate.  However, I know it was SW-happy and that's the main thing.

Back on the monitoring 100% today although it was nice not to have to pop everything on the scales and when I have lost this gain and am back to target, double checking for calories will only happen for higher calories foods, not for fruit, veg and salad. 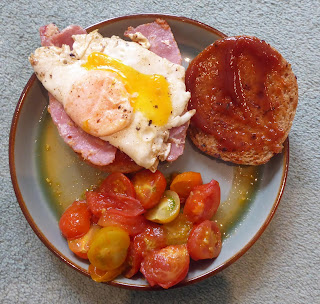 Bacon and egg muffin for breakfast and very nice too!
As mentioned above, I didn't track or take photos of lunch as Beth and Alex were round but it was all 'good'.  Some slow cooked ham (extremely lean), one half new potato, broccoli and runner beans.  I had a bit of Dijon mustard on the ham and that was it. 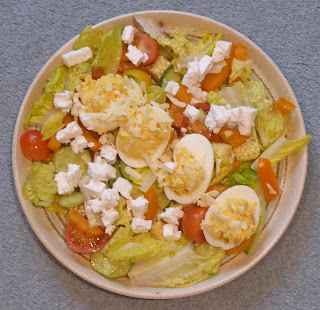 The light was very odd, hence the rather muddy looking photo, sorry.
I used just 30g cheddar in the cheg so I had 45g feta sprinkled over the salad for my other healthy extra A
I zizzed some frozen cherries with a white chocolate yogurt for dessert and then polished off a nectarine.
The cherries and yogurt is lovely.  As the cherries are chopped up, they semi-freeze the yogurt so it ends up as a frozen dessert.  It does keep in the freezer although it is very granular unless you get it out several times to blend it again, like you have to for ice cream.

B:  weetabix, yogurt and fruit
I so enjoyed this on Friday, I'm having it again.  One chocolate weetabix with some fruit, as little milk as possible and some yogurt.
SW:  100 ml semi skimmed is half of a healthy extra A.  One weetabix is half a healthy extra B and the rest is speed/free

L:  open ham sandwich salad; fruit
Leftovers from yesterday's roast dinner, all shredded and melt in the mouth.  I was going to have a one slice sandwich but I might turn it into an open sandwich, I haven't had one of those for ages.
I could spray and toast the slice of bread so it goes all crisp and crunchy, then spread it with some soft cheese with cracked black pepper, top it with some leaves and the slices of ham and have other salady bits and a portion of my spicy onion chutney on the side.  Yes, I really fancy that!  Lots of flavour and different textures.
SW:  half a syn for 34g for my onion chutney and two syns for 25g of that soft cheese with cracked black pepper I showed you in my haul post, half a healthy extra B for the bread and the rest is free/speed

D:  pasta carbonara, salad; fruit meringue
Both these recipes are in the new SW magazine under different names.  The spaghetti carbonara is p56 and the queen of puddings with berries is p 86.
I'm not sure about the carbonara as it looks a bit simplistic but I'll give it a go; I will use wholewheat tagliatelle as I don't have spaghetti, left over ham instead of bacon and I will soften some onion, pepper and mushrooms, finely chopped, to add to the mix  One egg yolk and 30g hard Italian cheese (more than it says) for the sauce and I think I will have a nice meal with some leaves on the side.  Dessert is just some fruit with a meringue made from the egg white and two tsp caster sugar spread over the top and then baked.  Like a lemon meringue pie without the lemon and the pastry - OK, not so much like a lemon meringue pie but you get the idea.
SW:  one healthy extra A for the main course and one and a half syns for dessert - I refuse to syn fruit just because it's had an argument with some heat .  I've checked the calories for the sugar and it is one syn for one tsp and one and a half for two because of the rounding effect.