Good morning, everyone.
A pound off at Slimming World.  Three cheers.  I'm happy with slow and steady although I do wish it was as easy to lose it as it is to gain it (I still love Christmas though).
While rummaging for the cooked mince yesterday, I realised that I'm now right out of portions of both beef and pork mince.  As it is so very convenient to have some, I will dig out some of the frozen raw mince today and do a slow cooker bolognaise-y sort of thing to put back in the freezer tomorrow.  It's one of those basics and while I know it's not actually 'using up', it is getting some freezer contents one step closer to being used up so I'm happy with that.
I also want to make a second batch of the syn free hash browns and, this time, cook them before freezing, just to see how that works.
Yesterday's meals: 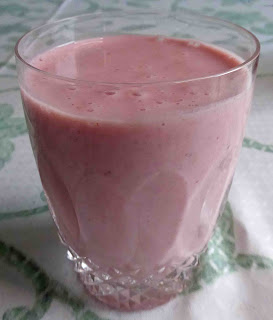 I used the oat milk for the first time and I thought it was absolutely lovely!  How can I have never tried it before, eh?  It's definitely a regular from now on.
I used some frozen strawberry and banana smoothie fruit mix, 175g of oat milk, 20g oats, skinny syrup, a bit of sweetener and a dollop of natural yogurt, well blended, and it made two of those glassfuls.  Yes, I had them both (why not) and yes, they filled me up and kept me full.
Making it with frozen fruit means you end up with a sort of slush puppy effect which wold be really refreshing on those hot summer morning.  I made it early and kept it in the fridge until after SW by which time it was cold but thawed - and so lovely! Leftovers from dinner the day before (the squash and chickpea traybake) with some added turkey (the last of the Christmas turkey slices that I froze) and I spent half a syn on some spray dressing.
Oh, it was tasty - no room for any fruit afterwards.
This is one of those recipes that could have infinite variation - the tray bake, I mean, not the salad. 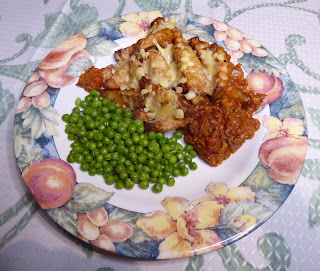 Chip pie and peas.  Nothing special, just another way of serving mince and chips but it was really nice.  I finished off with a yogurt, as usual.
.

Today's plans:
B:  weetabix with oat milk and fruit
SW:  half a healthy extra A for oat milk, one B for the weetabix
L:  cheesy pasta bake, salad; fruit
The pasta bake is leftovers from the freezer.  On the container it says 'add more cheese' so I will.
SW:  one syn for the pasta bake and one healthy extra A for more cheese
D:  sweet and spicy meatballs, rice, veg; yogurt
This is a recipe from the new Pinch of Nom book, p 50 and I've been wanting to make it for ages.  It looks and sounds delicious!
I'm making one sub and that is agave nectar for honey as it's definitely lower calorie for a very similar flavour; agave nectar is rather a cross between honey and maple syrup.
SW:  The whole thing is four syns which seems quite a lot so I hope it is worth it - it's not that high in calories.  Also half a syn for the yogurt
E:  kettle exercises,
Summary:
two healthy extra As (I'll probably drink the other half)
one healthy extra B
five and a half syns
From the freezer:
pasta bake
pork mince
also pork and beef mince, mixed peppers, peas and corn to slow cook
Into the freezer:
hash browns
Posted by Joy at 06:15:00