This felt like a bigger shop than usual as I was getting short of certain items such as Maldon Salt and baked beans.
Just to emphasise to anyone reading who isn't conversant with SW vocabulary, 'free' does not mean 'no calories'.  :-)

Frozen goods:
I was totally out of butternut squash and it is so useful to have this in the freezer.  When you're cooking for one, you don't usually need a whole squash.
As for the steam fresh veg, I know they are not the most frugal of purchases but they are extremely convenient.  One steam bag is usually two portions for me.
All speed on Slimming World. 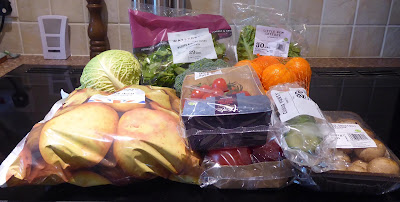 Fruit, veg and salad:
Rather more this week although most is veg as I already had apples and plums in the fridge.
I'm starting to fancy salads again now, which is nice.
Apart from the potatoes, I think all of this is speed food. 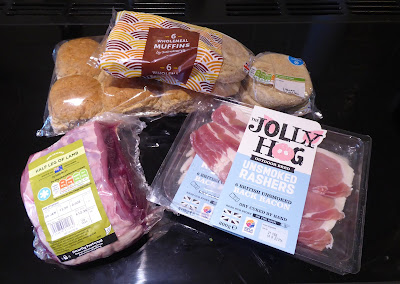 Bread and meat:
Yes, that s a half leg of lamb - It's expensive and getting more so at the moment but Beth and Alex are coming over for lunch next Sunday.
Lean lamb is SW free and I will cut the fat off the bacon to make it free too
I will individually wrap the rolls and the muffins for the freezer.  Both are six syns or a healthy extra B 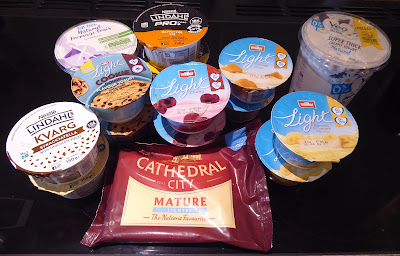 Dairy:
The usual cow load of yogurt, both flavoured and Greek, the usual kvarg (shockingly expensive but ever so nice), some fromage frais and I thought I would try lighter cheddar cheese this time and see if they've improved the flavour somewhat.  Worth a try anyway!
The yogurt and fromage frais are free, the yogurts and kvargs are half a syn each and 40g of the cheese is one healthy extra A or six syns 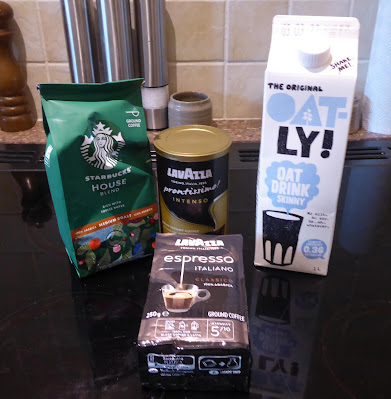 Coffee/drinks stuff:
When my friend Suzanne was here, she sang the praises of oat 'milk' in things like cereals, porridge, etc.  I just thought I'd give it a go.  350 mls of the kind I got (skinny) is a healthy extra A.
I do like my coffee. 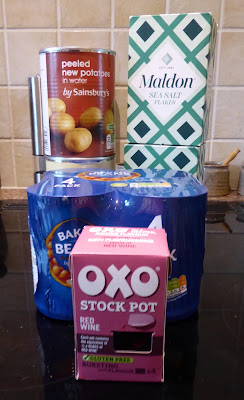 Store cupboard bits and bobs:
OK, Maldon Salt is a luxury but I like it and anyway it is supporting a local industry, isn't it?
This is all free on Slimming World.
I also got other non-food items, such as loo roll and kitchen towel.
What with what I already have, this should see me through a couple of weeks, probably with only fresh stuff to get next week.