Good morning.
Confession time again.  All yesterday's meals were very delicious and satisfying but . . . what a shame I went totally bananas in the evening!  Worse than bananas - bananas would have been relatively harmless.  Oh, dear.  Why do I do it?  This week hasn't gone brilliantly, sadly, but I guess we all have these times and there's only one thing to do - pick myself up, dust myself down and start again!  Again!

What do you do when that happens? 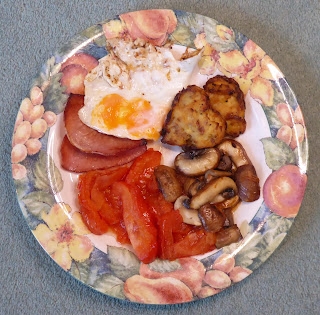 A most filling breakfast - one of these days I must just work out the calories of this sort of breakfast because it is SW 'free'.
The hash browns worked out well.  I took them out of the freezer and thawed them on the baking sheet I intended to use - which is just as well because they went all soggy and floppy and I couldn't have moved them onto the dish without them falling apart.  My heart sank but, in fact, half an hour in the oven with the bacon added after twenty minutes and they were most delicious.  I will never buy hash browns again, that's for sure!
Next time I will try them cooked straight from frozen and see how that works out. 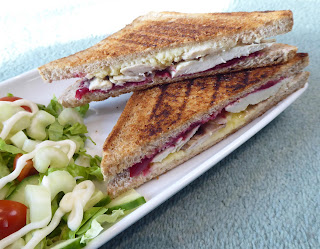 A nice way to use up leftovers - the last but one lot of cooked chicken and the very last smidgeon of cranberry sauce that I made just before Christmas.

And then I had an orange . . . and another orange not much later. 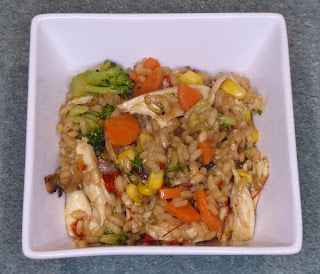 It's great that leftovers can make such a tasty meal.  Leftover chicken (the last), left over stock from the carcass and leftover veg - plus onion, pepper, mushroom, risotto rice, hard Italian cheese (the veggie version of parmesan) and seasonings.

And there's a couple of portions in the freezer too!
Just a shame that wasn't the last of my eating for the day, isn't it?

B:  poached egg on toast, tomatoes on the side
I'm going to try 'poaching' a couple of eggs in the actifry, using a couple of poaching pods.
Here's a link to the pods I have.  https://www.lakeland.co.uk/12116/Poachpod-Silicone-Egg-Poaching-Pods---Pack-of-2
SW:  half a healthy extra B for one slice of toast

L:  tomato and red pepper soup, cheese on toast; fruit
The soup is the last of the batch from the freezer.
SW:  one healthy extra A for the cheese and half a B for the toast
D:  hunter's chicken, veg; yogurt
I have some little pots of hm bbq sauce in the freezer so I can use one of those with a chicken sizzler and some onion, pepper and mushroom.  I'll probably soften the onion, brown the chicken sizzler (all in spray oil), then lay the chicken in an ovenproof dish with the veg under and over, top with the sauce and bake.  After around twenty minutes, I will sprinkle over some grated cheese and let that melt.  It should be nice - tasty and colourful.
SW:  the sauce is free, one healthy extra for the cheese, half a syn for the yogurt

E:  Kettle exercises, maybe a walk in the park.