Good morning, everyone.
Yesterday was a bit of an odd day.  I often say that I've had a hungry day when I've had to fight the nibblies all the way through.  Yesterday was quite the opposite - it was very much a not-hungry day.
I had breakfast as usual although it was a bit late, around eleven thirty, and enjoyed it very much indeed.
By the time it came to lunch, I just wasn't hungry but I knew I ought to have something because of personal training a bit later.  I nibbled on the turkey and bacon and had a bit of yogurt.  Then, after personal training, I toasted the bread and had some of the turkey pate with it because it was a strenuous session, I had planned this anyway and I didn't want to crash later on.  So I didn't have the salad, the chutney or the mayo.
Dinner was fine although I wasn't as 'ready' for it as I usually am and there's a little bit of tagine left which I will most likely toss in the soup at lunchtime, so as not to waste it.

Here are the egg coddlers, two of them anyway.  The strawberry one was mine, given by a parent ages ago and the flower one was Mum and Dad's.  The eggs were fine.  It's nothing fancy, just a boiled egg outside of it's shell or a poached egg not in water.  Next time I will add the cheese first as it was had to tell when the white at the top was cooked and I overdid them a bit.
It was good and filling. 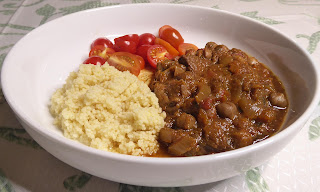 The tagine was very tasty.  I decided to just have raw tomatoes with it rather than cooked veg.  I finished off with yogurt, as usual.

Today's plans:
B:  bacon and egg muffin with tomatoes and mushrooms on the side
Because I love it!
SW:  one healthy extra B, one syn for some bbq sauce
L:  tomato, lentil and red pepper soup, grated cheese; fruit
I had half a can of chopped tomatoes and the fag end of a jar of red peppers left over from making the tagine so I chopped a bit of carrot and a bit of onion, bunged it all in Thermione with a tbsp red lentils, some vegetable stock powder and some seasonings, let it simmer for twenty five minutes, blended it all down and pushed the resulting gunk through a sieve.
(and I will add a little bit of tagine leftovers - odd but it will work ok, I am sure and anyway, waste not, want not!)
SW:  one healthy extra A for some grated cheddar
D: spicy butternut squash traybake, veg; yogurt
I also have chickpeas left from making the tagine so I searched on the SW site and found this recipe which rather appeals.  You can only access it if you are a SW member, sorry.
https://member.slimmingworld.co.uk/recipes/spicy-butternut-squash-tray-bake
I won't be adding the coriander and, as I have a healthy extra A left, I might grate that over the end product.  I'll be using frozen butternut squash so it will be cubes, not chips.
SW:  possibly one healthy extra A and half a syn for the yogurt
E:  kettle exercises, a walk
Summary:
up to two healthy extra As
one healthy extra B
one and a half syns
From the freezer:
wholewheat muffin
butternut squash
Posted by Joy at 06:54:00