Good morning.
Yesterday may have been rather jumbled and emotional but I didn't stray too far away from the beaten track, thank goodness.
Today is properly back on track, photos and all. 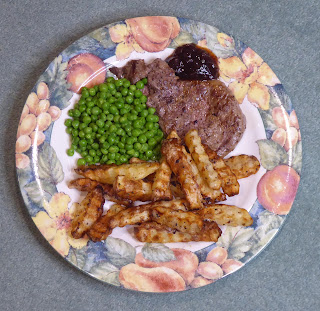 Just the one photo as I wasn't home for breakfast and lunch.  Instead of the mushroom sauce I had half-planned, I had a tbsp caramelised onion chutney from one of the half used jars in the fridge which I really MUST use up.
It was all lovely!

B:  a cooked breakfast
Bacon, egg, sausage, hm hash browns, tomatoes, mushrooms and, if I am feeling very, very cheeky, some baked beans too.
This time I will try baking the hash browns from frozen and see how that works.
SW:  the hash browns are half a syn for five but . . . I'm going to call it half a syn anyway, to be safe.  The sausage is two syns.

L:  beans on toast; fruit
Good, old fashioned baked beans on toast- how delicious is that!
SW:  one healthy extra A for grated cheese and one B for the toast
D:  a roast dinner - turkey, stuffing, roasties, parsnips, carrots, broccoli and sprouts; yogurt
I'm using one of those mini breast roast I made by cutting a full rolled breast into three.  The cranberry sauce is all gone but I found a little pot of plum sauce so I'm using some of that and mixing the rest into some Greek yogurt for dessert
SW:  There's no syns written on the pot of plum sauce but I will say two, just in case.  The yogurt and the stuffing will be free.

E:  kettle exercises and a walk