Good morning, everyone.
Another 'good', on plan day although the temptations are still there.  Wouldn't it be nice if we could really enjoy food at meal times and yet not be tempted at any other time.
Dream on, Joy, dream on!
I'm trying the lower fat cheddar with the lunch recipe - hopefully, it will be acceptable but is the extra ten grams worth the different taste?  I suspect not but - we will see. Breakfast was so delicious.  As the egg was pretty small, I used 30g oat bran and it made five pancakes, just a perfect amount for breakfast.  Must remember that!
I only needed one tbsp agave nectar, not the two I planned for, and the fruit is a mix of a few bits in the fridge and some from the freezer. 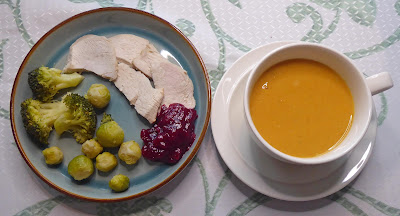 I know this looks more like a dinner and it would be if it was more but it went down well after circuit training, followed by an apple and a plum.
The carrot and lentil soup was really tasty.
Later on I had an orange. 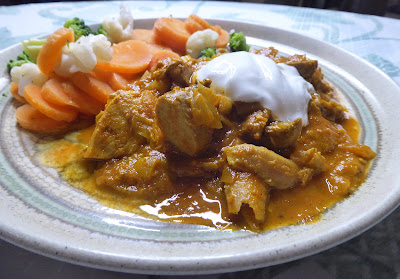 Turkey curry with veg and a good old dollop opf Greek yogurt on the top..
Yes, an odd mix but it was really very nice.
I finished it off with a yogurt.

Today's plans:
B:  hash browns, egg and smoked salmon, tomatoes on the side
I'm looking forward to this very much!
SW:  all speed or free, no syns
L:  chicken and sweetcorn pizza calzone, salad; fruit
This is a Pinch of Nom recipe that looks really quite tasty.
https://pinchofnom.com/recipes/chicken-and-sweetcorn-pizza-calzone/
There's also one for ham and mushroom and one for 'Christmas' so I might change my mind about the focus.
SW:  one healthy extra A for cheese, one B for the wrap, one syn for some mayo
D:  slow cooker macaroni cheese, turkey, broccoli; yogurt
This is an interesting one - a TikTok viral thing, I gather, that looks weird but is supposed to be good.  We will see.  I have the turkey leftover from Sunday and it should work with the macaroni cheese.
I'll let you know!
SW:  one healthy extra A and three syns for cheese (I'm adding a bit extra) and half a syn for the yogurt
E:  kettle exercises
Summary:
two healthy extra As
one healthy extra B
four and a half syns
From the freezer:
hash browns
smoked salmon
wrap
sweetcorn
mixed peppers
Posted by Joy at 07:18:00